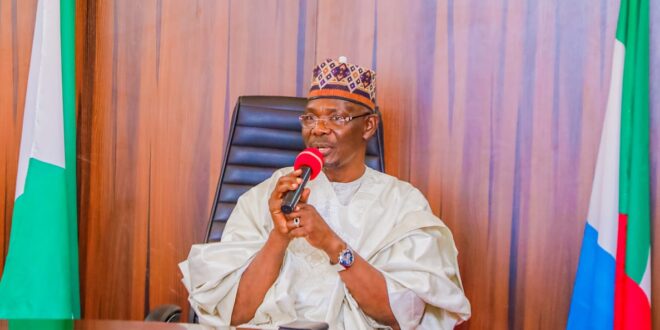 Nasarawa State Governor, Engineer Abdullahi Sule, has denied any attempt by his administration to impose any aspirants during the primaries of the All Progressives Congress (APC), stressing that he only supported aspirants chosen by the people.

Engineer Sule made the clarification when he hosted one of the aspirants for the seat of the Keffi/Karu/Kokona federal constituency, Dr Nghargbu K’tso, at the Nasarawa Governor’s Lodge, in Abuja, on Tuesday.

According to the Governor, his stand on the primary elections was for his administration to support only aspirants who have the support of the people.

He explained that that informed his decision to ask aspirants under the platform of the APC to go back and seek the support of the people, as he has no intention of imposing any candidate.

Engineer Sule commended Dr Ngharbu for accepting to step down from the contest in the interest of the party and that of his administration.

He told the former House of Representatives aspirant that, despite pressure from traditional rulers from Mada Nation, for him to intervene by calling on Ngharbu to withdraw from the race, he maintained his earlier stand not to interfere.

“My position has remained that, once the aspirants have the support of the people, they will have my support. I will only support whoever the people want,” he stated.

Earlier in his opening remarks, Dr Ngharbu K’tso, said he was at the Nasarawa Governor’s Lodge alongside his campaign team, to assure the Governor of his continuous loyalty and support to both the APC and the Engineer Sule administration.

Dr Ngharbu said he took his stepping down from the contest to clinch the ticket of the party for the Keffi/Karu/Kokona federal constituency in good faith, saying he has no intention of leaving the APC.

He, therefore, assured the Governor of his unalloyed support and loyalty, together with his entire campaign team.

Dr Ngharbu was accompanied on the visit by the director-general of his campaign team, Alhaji Nasiru Usman, as well as the entire members of the team.

Previous Anoint Jack-Rich As Your Successor, Youths Group Tells Buhari
Next How NDE Is Fighting Unemployment In Nigeria