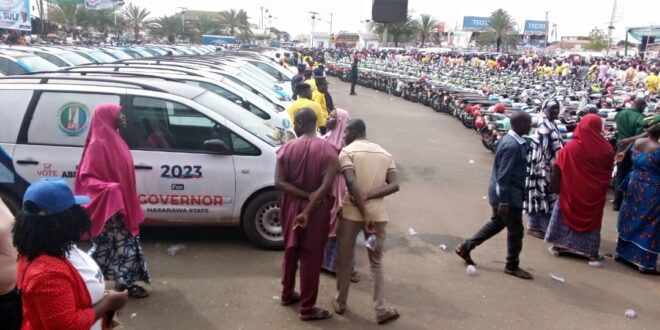 President Muhammadu Buhari has inaugurated a 385-member campaign council for the reelection bid of Gov. Abdullahi Sule ahead of the 2023 general elections.

Speaking at the inauguration ceremony on Saturday in Lafia, the President said the campaign council would be in the forefront for the reelection of Gov. Sule and election of Bola Tinubu, presidential candidate of All Progressives Congress (APC).

Represented by his Chief of Staff,  Professor Ibrahim Gambari, Buhari added that his administration has been committed to safety and security, revitalisation of Agriculture and diversification of the economy, provision of infrastructure, fighting corruption and others and such legacies would be sustain and improve upon by Tinubu.

on his part, Sen. Abdullahi Adamu, National Chairman of APC said the Presidential candidate of the party has been tested and trusted in the areas of human capital development, improved revenue generation and a man of ideas.

Adamu believed that Tinubu would make the country better security wise and make its economy the best in African when elected as president in 2023.

“Tinubu served as a governor of Lagos and he made its economy and the entire system working again and will replicate that in the country by the grace of God,” Adamu added.

The APC National Chairman has also called on the people to vote for Gov. Sule again to consolidate on his laudable achievements in security, agriculture, infrastructure, human capital development, better welfare for workers, employment generation among others.

Adamu said that Nasarawa State is an APC state and the party would win election in the state in 2023.

Also speaking at the occasion, Gov. Abdullahi Sule lauded the people of the state for their support to him in 2019 election and appealed to them to support him, Presidential candidate, and other candidates of the party in 2023 election. 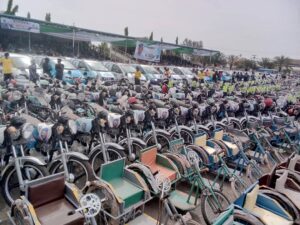 Gov. Sule also said that despite that the state government under his watch has impacted in the lives of the people in various sectors, they would not be overconfidence.

Sule said that apart from the 385-member council, they would also constitute another council in all the polling units and electoral wards in the state.

The governor also distributed over 30 Sharon vehicles, over 300 motorcycles, 20 wheelchairs to person living with disabilities to enable them reach out to all the polling units to campaign for the success of the party.

Also, John Mamman, Nasarawa State APC Chairman said the party is sure of winning all elections in the state in 2023 giving the achievements recorded by Gov. Sule.