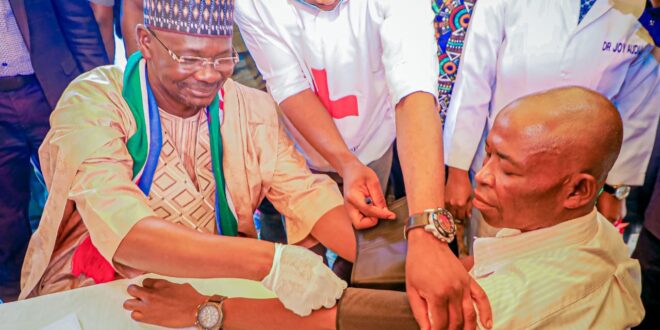 Lafia Old Students Association (LOSA) has begun a free medical outreach in Karu Local Government Area (LGA) to complement the effort of Gov. Abdullahi Sule of Nasarawa State and to show thier support to his reelection bid.

Dr Faisal Shuaib, President of the association made the disclosure at the inauguration of the exercise on Wednesday at Karu Local Government Area (LGA).

He said that medical outreach would be sustain in all the nocks and crannies of Nasarawa State throughout the tenure of the governor.

Dr Faisal Shiaibu who is also the Executive Director and Chief Executive Officer, Primary Healthcare Development Agency, said the outreach was aimed at improving the living condition of the people of the state.

He explained that health is wealth and absence of good health could expose the people to poverty and even death, hence the need for all hands to be on deck to ensure a healthy society.

Dr Faisal Shiaibu explained that the state government under Abdullahi Sule has done a lot to improve the heath of the people and make healthcare services accessible to them.

He added that the governor had also consistently recruited Medical Doctors, Pharmacists, Nurses to fill in vacancies and to meet world standard of Doctor to patient ratio.

“The State had also performed credibly well in COVID-19 vaccine which had earned it an award.

“It is only right to support the government in this effort to encourage it to do more,” the LOSA President added.

He added said that during the outreach in the 13 LGAs of the state, the medical team would carryout surgery, test, counselling and administer drugs to patients free of charge.

He therefore called on the people of the state to vote for Gov. Abdullahi Sule again to enable him continue the good work he has been doing beyond 2023.

In his remark, Gov. Sule expressed gratitude to Faisal Shiaibu for the kind gesture and support to better the health of the people.

The governor described Dr Shiaibu as a worthy ambassador of Nasarawa State and wished him continued success in his national assignment.

The governor also promised to build more Primary Healthcare Centres in Karu LGA to meet the increasing population of the area, as the existing once have been overstretched.

Sule also assured the people to do more than what he has done in his first tenure if reelected in 2023.