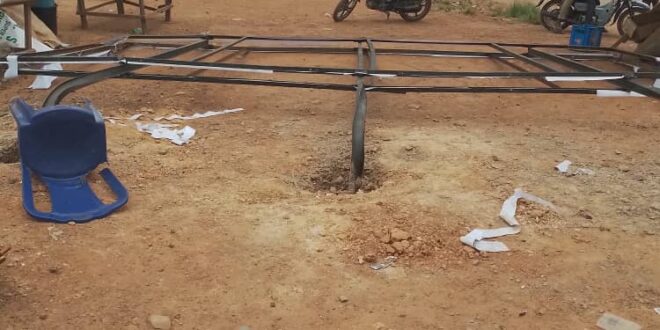 Odoh in a statement signed by his Special Assistant on Media and Publicity, Charles Otu alleged that the state security personnel were shooting sporadically in other perfect the destruction of the parties billboard in the Ohaozara local government area of the state.

But the Special Security Consultant to Ebonyi state government, Stanley Emegha denied the shooting but said that the state government was never against any political opposition parties, rather they are asked to pay for the space of land they are using for their advertorial.
Odoh in the statement was quoted to have queried why security agencies in Ebonyi have refused to arrest the people destroying the party’s Billboard.

Odoh in the statement said, “Barely two weeks after the destruction of billboards belonging to the All Progressives Grand Alliance, APGA Governorship and Deputy Governorship candidates for the 2023 elections, Professor Benard Ifeanyi Odoh and Dr. Nkata Nwani Chukwu in the Abakaliki urban metropolis, Ebonyi State government’s armed militia who are disguising as members of the Ebubeagu security outfit, at about 7:30 P.M yesterday, Monday, September 5th, 2022 launched fresh attacks on APGA billboards in Okposi and Ugwulangwu communities in Ohaozara Local Government Area of Ebonyi State.

“Our Party loyalist who sufficiently briefed the APGA candidate’s team as an eyewitness, Hon. Collins Agwu narrated that a team of young men numbering seven had stormed the Okposi Court Area where he and his fellow APGA supporters had wanted to mount a billboard of the APGA Governorship candidate and his Deputy who incidentally hails from the community at the popular Court area.
The seven of them all dressed in Ebubeagu attire insisted that they cannot be allowed to mount billboards in the Court Area because according to them, even though very strangely, the area is owned by the government.

“As peace-loving citizens, the APGA leader and his boys had moved to another point within the Okposi roundabout to mount the billboard and were again confronted by the armed Ebubeagu members instituted by the state government. Their leader, one Dickson Okire (a.k.a. Daggazy) and another identified as Sambo had again reportedly approached them and demanded if they had paid the relevant signage fees to the local government council authorities to which he had promptly replied that there were not aware that political Parties now pay for their own billboard spaces at the Local Government.

“Agwu had however promised to go to the council to enquire and possibly do the needful as a law-abiding citizen when suddenly the boys, all armed with pump action riffles started shooting sporadically, insisting that everything and everybody must go down. Their ring leader, the said Dickson who started the shooting into the air said they were given orders from above to come and burn down the billboards and that there would be no peace until their evil mission was well accomplished as directed.

“APGA followers who did not want to confront the lawless men reportedly scampered for safety at that point, some sustaining varying degrees of injuries while the armed Ebubeagu officials who came in three Sienna vehicles confiscated and tore the flex banners and fled the scene still shooting sporadically into the air. Other items which they also made away with include; a full bag of cement, a digger, a pick axe, and a cutlass/matchet including two bags of graded stones and one bag of sea sharp sand”.

On his part Emegha said, “Why are you people always asking the questions you know the answers very well, the government is not against anybody putting up a billboard but that they should go and pay for the land and not for the government to be chasing them up and down to do the right thing.

” You know I was in the capital territory board, before any billboard is mounted you pay for it, even the APC paid for the spaces they use for their billboard, go to the ministry you will see the proof.

“As for Ebubeagu shooting sporadically, that is just the party spicing their claims. I want you to know that it is not only Ebubeagu people that are in this task force, Civil Defence people are there and other security agencies”, he said