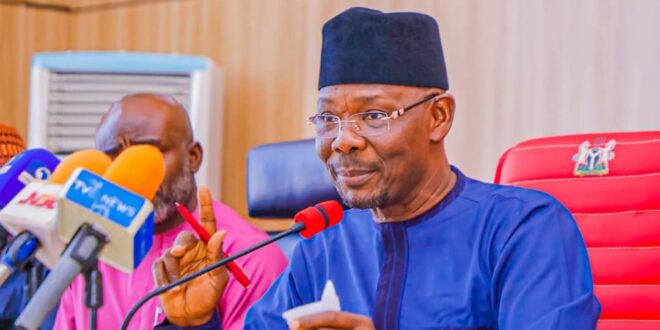 Association of Tiv Civil Servants in Nasarawa State have endorsed Gov. Abdullahi Sule for second term in office ahead of the forthcoming general election.

Speaking at the maiden meeting of the group on Sunday in Lafia, Chairman of the association, Mr Christopher Ihuman, said thier decision to endorse the governor was because of his worker’s friendly policies in the last three years.

The Chairman who is a Principal Accountant in the Ministry of Finance, said that hitherto workers were stagnated in same level for over 10 years, but Gov. Sule implemented the outstanding promotions thereby ensuring career progression.

He added that the governor had also given priority to payment of pension and gratuity for retired civil servants to make thier lives meaningful after active service.

He added that Tiv people in the Southern part of the state who are predominantly farmers have enjoyed peace and are able to go to thier farms in the last three years.

He also commended the governor for massive employment of workers, renovation of schools and hospital as well as provision of equipment, construction and rehabilitation of urban and rural roads, prompt and regular payment of salaries.

Ihuman assured the governor that because thier villages are witnessing peace and thier people are farming and those in civil service were promoted, they would campaign tirelessly to ensure that the governor us reelected.

The Chairman of however, appealed to governor to elevate some of their people to positions of Directors and Permanent Secretary and offer more of thier graduates employment in civil service.

Responding, Gov Sule represented by his Deputy, Dr Emmanuel Akabe expressed gratitude to the group for having confidence in the administration.

Gov. Sule said peace and security of lives and property was one of the topmost priority of his administration and he would continue to do his best to ensure peace in all parts of the state.

Sule also expressed gratitude for the support they are giving to his administration in the last three years and promised to carry the Tiv people along in every policies and programmes of the government.

The governor therefore called on them to vote for all the candidates of All Progressives Congress in the forthcoming elections.
End.