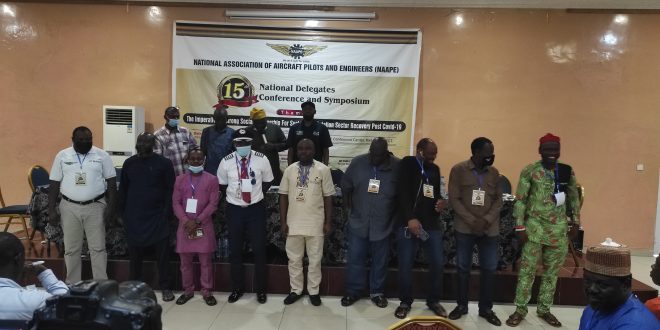 The National Association of Aircraft Pilots and Engineers (NAAPE) at the weekend reelected the outgoing president Comrade Abednego Galadima for another team of four years.

The association after her 15th National Delegates Conference and Symposium in Abuja Nigeria, return unopposed all the members of National Administrative Council (NAC) , except the post of the national treasurer that was contested for.

However, for the only post contested for, Comrade Bunmi Gendeh defeated Comrade Numaliya T. Kwasau to become the National Treasurer of the association.

In his acceptance speech, the National President Comrade Abednego Galadima while commending the members for the confidence repost on his team, said welfare of members will be top on the agenda.

He assured employers in the aviation sector that the association would partner with them to uplift the growth of the industry.

according to him “I feel very elated for the confidence repost in me and my team , I’m grateful to God for sparing our lives to this very moment and for what He has enable us to achieve on the cause of our first tenure more will come in this next level.

“As you can see we have already suggested constitutional amendment that would strengthen our union, we would face headon the hostility coming from the employers and in doing that we would capitalise and cash on social dialogue so that people will see union true our lenses and they would understand that union is not to bring down businesses.

On the welfare of members in aviation agencies, He said “I serve as a member in a Ministerial Committee that were set up to consider the harmonisation of salary of aviation agencies, so I will vigorously pursuit to the logical conclusion to ensure members benefit”.

NAAPE Calls For Upward Review Of Remunerations Of Pilots, Engineers

Maltreatment of Aircraft Pilots A Recipe For Disaster- Wabba