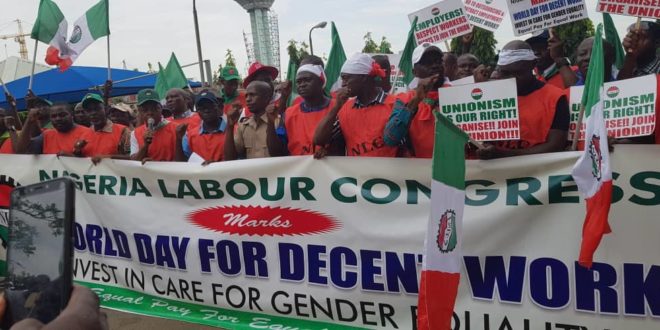 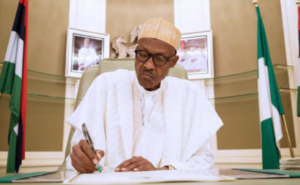 Speaking during an interview with newsmen at the end of the presentation, Usman Dutse, President  of Academic Staff Union of Polytechnics stated that his Association was willing to hold government by it words especially as it concerned minimum wage implementation and other sundry issues

“Government have promised to commence the implementation of minimum wage immediately. We believe that they are going to backdate it to the time Mr President approved the minimum wage. We expect that government Will do it without further delay because it is a presidential directive” he said

On how to enforce compliance and implementation by state governors,  “Actually there are measures that will be taken to ensure the compliance to the minimum wage law by state governors. And I know that these measures are not to be preempted until the right time comes. Definitely the organized union in conjunction with other agencies will ensure that the right thing will be done to ensure full implementation” he added

On 21 days ultimatum by ASUP to the federal government, the Union leader said

“We believe that government have done her own part to ensure that we have a successful discusse that will be executed as agreed. For now we are going back to our Congresses, to our National Executive council meetings to present what we have received here so that it will guide our subsequent decisions and actions. The peculiarities are particularly the issue of retirement age at 65 years which have been captured, another is the issue of our allowances which have also been debated, issues of sabbatical and part time have been addressed. Issues of payment of our promotions and the redress mechanism have also been indicated the way they will also be addressed.

“Other issues that have to do with promotion and promotion arrears have also been indicated how that can be done. Our believe is that those things are going to be executed as implemented so we present it back to our NEC also” he concluded.

The Association however doubted the feasibility of government ensuring the immediate implementation of the new salary structures effects  from April when it was signed by Muhammadu Buhari.

In the same light, the Public Relation Officer of ASUP, Mr Chris Nkoro said the adjustment made on the template in capturing the perculaiarities should be used for enrolment.

“The generality has come of the view that because of the adjustment they have also made on the template in capturing those peculiarities, we think that we can enroll.
“The most important thing is what they are giving us, let them also put it into practice. We also asked for the module backing up the data they have given us, that was also agreed.

“Other peculiarities including those going on leave of absence, they said it could be captured and the meeting agreed that they should capture some of those peculiarities that were mentioned and issues people have raised” he stated

“Because it was easy for the government to carry it out because they saw that they had the resources. Whatever are our requirements. Personnel cost is over two trillion. Look at the budget, recurrence is 73 percent, capital is 24 percent. How will the government get the money to run the system?

“On minimum wage and consequential adjustment, We are hundred percent sure, we are talking everyday and if you say the salaries are poor, the government is able to see that actually this is good enough because of revenue. Don’t let some people hide under these things and be making extra money in our name. Are we truly spending that kind of money? We have gone to the field, we have seen the the number of persons they have as compared to what they normally claimed they have.

” The other issue have got to do with tax. Ladies and gentlemen, as a patriotic Nigerian I will not and I don’t think I have ever deviated from my tax. Even when I have to go to Kottonou and bring Torkunbo, I will make sure I pay the customs. So for us to have the moral right to challenge government, we must do what we  are supposed to do, have you done your own part of it? When we criticise government, believe you me we must pay our taxes because its a basic rule. When you are paying your tax, you can challenge the government to tell you what they have done with tax payers money. Tax is a law. We only pay salaries after VAT because the government want to know how much that will come to them. Most of the time, whatsoever come to government have never been enough to pay the debts that we are owing. Please let us have an opened mind because if we have an opened mind, we will not be saying do and then let’s fight” he concluded