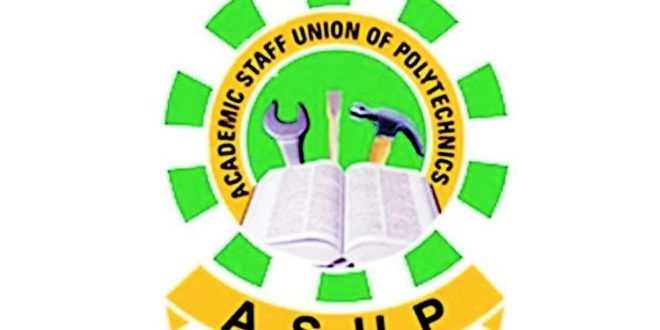 President of ASUP, Comrade Anderson U.Ezeibe while reacting to statement credited to Education Minister, Mallam Adamu Adamu on the issues advised Federal Government to jettison such move because the strike was as a result of the inability of government to implement outcome of collective bargaining agreements.

Comrade Ezeibe further lamented that the Nigeria public tertiary education sector is terminally sick and deserves intensive care rather than the current approach of the government which is akin to mercy killing of the sector in medical parlance.

The Union leader also called for a genuine and a sustainable resolution to the issues, and not the current arm twisting disposition of the government which is not helpful.

“We have read reports of a statement credited to the Honorable Minister of Education on payment of arrears of salaries to striking members of the Academic Staff Union of Universities (ASUU).

“The report expressed the government’s refusal to release salaries of the members of ASUU who have been on an industrial action since February 14, 2022 citing the “no work, no pay policy” of the government as basis for the decision of the government.

“In view of the fact that the nation’s tertiary education landscape has been bedeviled by avoidable trade dispute issues consistently for decades, we view the government’s disposition as disappointing, poorly thought out and indeed unhelpful in the circumstance.

“It is in the public domain that the bane of industrial harmony in the sector is rooted in the inability of governments over the years to respect outcomes of collective bargaining processes and indeed the low priority placed on education by successive governments in the country.

“It is common knowledge that our public tertiary education sector is terminally sick and deserves intensive care rather than the current approach of the government which is akin to mercy killing of the sector in medical parlance.

“Our disposition is that an honest and nationalistic approach should be deployed by the government in resolving the challenges in the sector, particularly in view of its critical position in nation building.

“The arm twisting disposition of the government is therefore unhelpful in the circumstance and can actually lead to complications rather than the desired industrial harmony.

“Our Union therefore advises the government to seek avenues for sustainable resolution of the issues in dispute in honest, transparent and productive engagements with the
stakeholders in the sector for the greater good of the society and jettison this ill-advised path of withholding salaries of striking members of ASUU”.