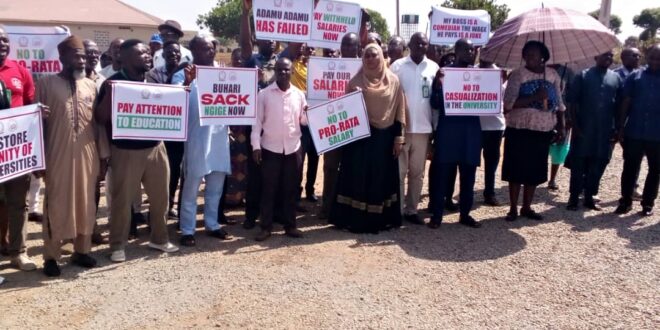 The Academic Staff Union of Universities (ASUU) Federal University of Lafia (FULafia), Nasarawa State has protested the half payment of thier salaries by the Federal Government (FG).

The members of the union on Friday in Lafia matched round the premises of the institution to press home thier demand for complete payment of thier salaries.

They carried placards with inscriptions such as, pay withheld salaries now, Adamu Adamu has failed, No to Pro rata salary, pay attention to education, restore dignity of universities among others.

Addressing the protesting lectures, Mr Adam Al-Amin Abdullahi, ASUU Chairman of FULafia said they are protesting against pro-rata salary and want the government to pay them thier eight months outstanding salaries.

He explained that the work of a Lecturer is beyond just lectures in the class room.

“We carryout research in the library, laboratory, our homes, supervised projects and mark scripts.

“So, the government cannot calculate our salaries based on lectures as if we are casual workers.

“We have demonstrated maturity and love for the educational development of the country be resuming back to work, so the government should do the needful to avoid further crisis in the sector,” the ASUU Chairman added.

Mr Al-Amin Abdullahi also said that the union had declared lecture-free-day in the university today because of the protest and might step up the protest if the government still refuse to pay them.

The union also called on President Muhammadu Buhari to sack Chris Ngege, Ministe of Labour and and Employment and Adamu Adamu, Minister of Education for mishandling the strike by the union.

Some students who preferred anonymity, appealed to the Federal Government to address the issues of welfare of the lectures to enable them have smooth a academic calendar.

They said their examination was supposed to be in Match by the school calendar, but things take unfortunate dimension because of the lingered strike and its aftermath.