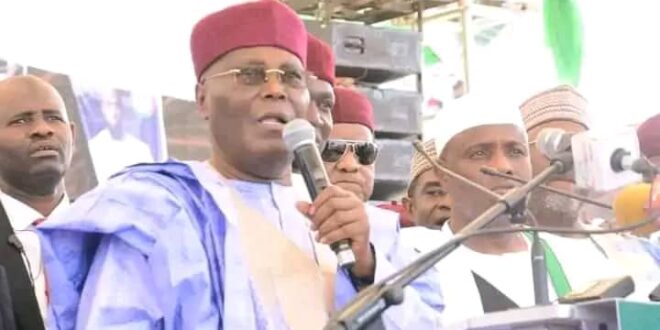 The recently appointed Director General, Atiku Youth Wing, Comrade Rowland Odih, has called on young people living within North Central region to engage Governor Samuel Ortom on his recent comments which according to him tilted towards the extreme, and a leader of his status should desist from such comments.

He made this known recently in Maiduguri, Borno State while reacting to the statement credited to Governor Ortom, on not supporting any Fulani for President.

Odih noted that as youths we hold the levers of change and should be bold to ask the necessary questions that identifies us with enhancing the process of making Nigeria better.

He said the world is talking about the involvement of Young People in the process of leadership in their communities, countries and globally, by ensuring that their energies are channelled to positive changes that can stimulate the economy and propose a process that would better engage young people within the country and beyond. These are a summary of the Atiku Proposal to the Youth with a better engagement.

Odih, noted that Nigeria is at a very sensitive period when leaders should be telling their followers to refrain from using words that suggests Ethnic profiling, which according to researchers on human relations does not promote peaceful coexistence.

He said that informed young people from the North Central Region should find time to engage their leaders and draw their attention to what they have done right or wrong and make proposal to them on how to better engage the youth, taking into cognizance the huge potentials they parade.

Odih urged the 5 aggrieved Governors to sheath their swords, as their collective interest is captured in the Atiku Proposal to Nigerians, which they would be strategic in driving the process and it will form the basis of their partnership in our collective quest to regain our land and people.

The leadership PDP of has said we understand the challenges of the country and has commenced the process of resolving them by immediately ensuring that the electorates are sensitized ahead of the General Elections and we call on our Party Leaders in Rivers, Benue, Oyo, Abia and Enugu States among many others that have shown strong willingness to work toward our resounding victory to sustain the campaign.