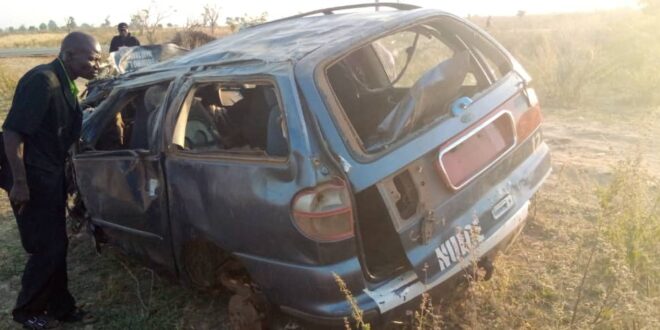 Inspector Samson Yaki, inspector Ezekiel Thomas and inspector Dickle Haruna made thier dead while coming from Gwada where they went to enjoy their Christmas celebration.

Eyes witness account revealed that the accident occurred as a result of head collision with Sharon car from Minna to Kuta and an unregistered new model car FAW coming from Gwada.

Five out of the 8 occupants of the Sharon car died instantly including an infant while the three occupants of the second car all police friends with uniform ranks of inspector also died immediately.

The eye witness who simply give his name as Mr. Bride while speaking to our Correspondent said the fourth friend who supposed to went out with them received a pressing and an emergency call and excused them to go back home to solve the issue.

The three friends were returning from Gwada in a cool evening after a jolly ride when the accident happened along Gwada -Gunu road around Shakwatu area.

“Imagine, life is so short, this man called me not quite long and handed a back of Rice to me without asking him only for me to recieved this shocking news, it is unbelievable but as am talking to you now we just finished the police report and handed over to their families”.

According to him, thier remains has been deposited to mortuary at General hospital Minna, Niger State.