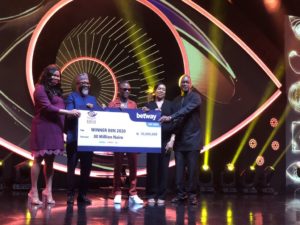 The winner of the Big Brother Naija Season 5, Laycon was the cynosure of all eyes on Wednesday when the presentation of his N30 million cheque was broadcast live on DStv Channel 198.

Laycon won a total prize worth 85 million but 30 million in cash. The other add-ons include a two-bedroom apartment given by Revolution Home, a trip to Dublin sponsored by Guinness, among others.

During questions from the press, Laycon revealed he would be using his music to touch lives, adding it was the primary reason he went into the Big Brother House in the first place.

How Jealous Wife Cuts Off Husband’s Manhood in Taraba

It was also a win-win situation for Multichoice and major sponsor, Betway as both confessed it was as rewarding to them as it was envisaged, NaijaCover Reports.

Previous FG Directs Suspension of Multi Year Tariff Order 2020
Next Meet the Female pastor that dumped the Alter for a club.

How ECDA Leadership Strives To Sustain Standard, Addressing Impediments In ECSS By Anthony Adgidzi The …

PDP To Deliver Nasarawa State To Atiku, Umbugadu In 2023 Ahead of the 2023 general …