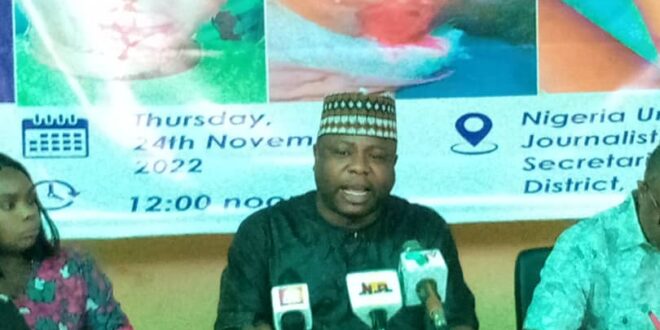 Two campaigners against Sexual and Gender Based Violence – Men Against Rape Foundation (MARF) and Make A Difference Initiative (MARF) have chided the Domestic and Sexual Violence Agency (DSVA) of Lagos State for their woeful handling of a distress call for help made to them by late 35 year old Mrs Bimbo Ogbonna.

The two bodies accused DSVA of negligence and complicity in the circumstances, which led to the death of 35 year old, Mrs Bimbo Ogbonna.

Although Bimbo was alleged to have bought kerosene and set herself ablaze following violence that broke out with her husband, Mr. Ikechukwu Ogbonna on the 13th of October, 2022 in their apartment in Lagos, the two bodies believe that claim seems far-fetched and should therefore be investigated.

Speaking at a press conference in Abuja, the Executive Director of Men Against Rape Foundation (MARF), Lemmy Ughegbe and Director of Investigation, Make A Difference Initiative, Comrade Jacob Edi, the campaigners said the Domestic and Sexual Violence Agency of Lagos State, which they had respect for because of their good work, failed to act proactively in Bimbo’s case.

“Based on our background in investigative journalism, we have taken time out to investigate the circumstances that led to Bimbo death and it is as disheartening as it was avoidable”, Ughegbe noted.
“It is on record that Bimbo cried out, filed formal complaint to Lagos DSVA about serial abuses by her husband, Mr. Ikechukwu Ogbonna. We also have recorded conversation between Bimbo and a DSVA official, wherein Bimbo was distressed and called the agency for urgent action. Unfortunately, the evidence we have is that the DSVA treated it with complacency and usual bureaucratese of public service.”
“For an agency set-up to deal expeditiously with issues of Domestic and Sexual Violence expeditiously, the complacency with which Bimbo’s distress call was treated amounts to negligence and complicity in situations that led to her death”, Ughegbe added.
He noted that it is even more ironic to note that an agency whose facebook page carries the message ¬“every domestic violence case is a potential murder case” will not act on a distress call from someone who has even taken the extra step to lodge two complaints already.

In his own remark, Comrade Jacob Edi, who decried the rising tide of Domestic and Sexual Violence called on the Lagos State Director of Public Prosecution to call the DSVA for the files with documentary evidence of physical abuses of the deceased by her husband.

“We have seen video recording by Mr. Ogbonna while his wife was locked inside the house with fire. How can a man whose wife is on fire be so calm to record the incident instead of call for help? Comrade Edi queried.

Edi said that singularly act, with the substantial evidence of his abuses of Bimbo, shows clearly that he knows more than he is saying about the fire incident that killed his wife.

In her own remark, Barrister Toyin Falaye of Jewels Hive Initiative said “Bimbo’s death and the action of the Law agency is as though Bimbo is victimised even in death.”

“Victims of domestic and gender based violence suffer victimization while in an abusive marriage or relationship and sweeping Bimbo’s case under the carpet is sending the wrong signal”, she added.

We as CSO and gender advocates are demanding and begging for answers!

It will be justice for all if we get the answers as to to give closure to other survivors.