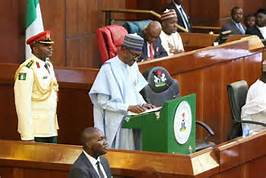 The appointment is coming at exactly the time that the cries and hues about marginalisation of the South East of Nigeria has reached unprecedented heights.

It came also few days after the South East lost a Federal position of the Chairman of the Revenue Mobilisation Allocation and Fiscal Commission not by the making of President Muhammadu Buhari but due to the fact that the holder of that office responded to the directive of President Muhammadu Buhari to resign since he has gone to seek for the elective office of the governor of Ebonyi State.

That great man is Engineer Elias MBAM, one time minister of State for Finance. So the vacancy at the office of the Accountant General of the Federation couldn’t have happened at a good time particularly because the person who took over from Elias MBAM at the Revenue Mobilisation Allocation and Fiscal Commission hails from Kano State which ironically settles any subtle agitation for a replacement from Kano, the North West of Nigeria which has now been adequately covered and accommodated in the sense that the Accountant General of the Federation who has just been indefinitely suspended and us undergoing investigative activities of the Economic and Financial Crimes Commission is from Kano State.

This is one superb appointment made by Mr. President – indeed a round peg in a round hole. This kind of fitting appointment happens when thorough preparation meets opportunity. Nwabuoku’s appointment is coming in the wake of an investigation of the former Accountant-General, Ahmed Idris over N80 billion fraud, for which he is now a guest of the Economic and Financial Crimes Commission, EFCC.

Nwabuoku’s appointment was dated May 20th, 2022 and conveyed by Aliyu Ahmed, the Permanent Secretary in the Federal Ministry of Finance, Budget and National Planning. An Accountant General of the Federation (AGF) is usually appointed to the position from the ranks of Directors of Finance and Administration, and the individual must show proven competence and cognate experience in public accounting.

The mandates of the Office of Accountant General of the Federation are so overarching. Before looking into Anamekwe Nwabuoku’s rich credentials as most qualified for the job, it is important to highlight some of the job specifications of the all-important office. The office supervises the accounts of federal ministries and extra-ministerial departments and other arms of government; it collates, presents and publishes statutory financial statements of accounts required by the Minister of finance as well as managing Federal Government investments and maintaining and operating the federation account.

The responsibility of the Office of the Accountant General is also to promote and enforce transparency and effective management in respect of revenue expenditure, assets and liabilities of institutions in all three spheres of Government.

The functions of the Office of the Accountant-General also extend to administration of the National Revenue Fund (NRF) and the Reconstruction and Development Programme Fund (RDPF), as well as banking services for national departments. The office is also responsible for developing policies and frameworks on accounting, internal audit and risk management for the federation.

It is still that office that maintains and operates the federation account as well as the accounts of the Consolidated Revenue Fund, Contingencies Fund and other public funds, and provides cash backing for the operation of the federal government. It conducts routine and in-depth inspection of the books of accounts of federal ministries and extra-ministerial departments to ensure compliance with rules, regulations, policies, and Internal Audit Guides.

It is also the office of the Accountant-General that carries out investigations into cases of fraud, loss of funds, assets and store items and other financial malpractices in ministries/extra-ministerial department and ensures that there are adequate systems in public funds and for the coordination of the collection and disbursement of public funds and coordination of accounting systems.

The head of an office as critical as the OAGF has to be really competent and should not be integrity challenged if these mandates will be met in order to ensure the financial health of the nation. Considering the fact that corruption is now endemic in Nigeria and the nation hemorrhages in its public sector, the Office of the Accountant-General has its hands full. Thus, the appointment of Anamekwe Nwabuoku could not have come at a better time as one with proven track records of performance and shining example of integrity. Is there any wonder then that some anarchists are already jittery and are jumping all over the place to manufacture a scandal where none exists. This is what usually happens when a good person is appointed and principalities are scared that their vested interests may be threatened.

Reports have it that the suspended Accountant-General retired from service in 2021 as a civil servant but was irregularly reappointed as a political appointee. Fact checks also show that the embattled Accountant General of the Federation stayed in office after he served out his term as AGF and after attaining the retirement age of 60 years. In other words, Ahmed Idris should be considered to be the first to transition from a civil service AGF to a political appointee in the same capacity, which is most irregular in the annals of the nation’s history and unhealthy for that kind of office that ought to be shielded from the vagaries of politics. Having been suspended on account of graft, guilty or not, his returning to that office should not be contemplated for this same reason.

Yet, the letter of appointment of Mr. Anamekwe Nwabuoku stated that he has to oversee the Office of the Accountant-General of the Federation, pending the outcome of the EFCC investigation of the suspended AGF, Ahmad Idris. In other words, the return of the suspended AGF is also contemplated, which shouldn’t be, given the irregularities in his appointment apart from the allegations of graft leading to the confiscation of several properties linked to him by the EFCC.

Whether by divine providence or otherwise, the choice of Nwabuoku Anamekwe as acting AGF is an excellent one with such an impressive resume. Mr. Anamekwe holds a Higher National Diploma (HND) in Accountancy from the Institute of Management and Technology (IMT) Enugu, and a Master of Science (M.Sc.) in Financial Management from Commonwealth University, Belize. He started his civil service career with the Centre for Democratic Studies (CDS) and rose to the position of Principal Accountant between 1992 and 1995. Before his appointment, Mr. Anamekwe was Director, Inspectorate Office of the Accountant-General of the Federation, and presently overseeing the office of the Accountant General of the Federation.

It is noteworthy that no one from the Eastern part of the country has ever held the office of Accountant General of the Federation until this providential appointment of Mr. Anamekwe in acting capacity. However, while the people are hailing Mr. President for it, some faceless individuals are flying the kites of corruption allegations over the man despite his impeccable record and reputation.

These politically instigated dimwits who stay in the labyrinths of social media to concoct half-baked fictions against hardworking citizens can only further the war of attrition against Ndigbo in Nigeria. They do not mean well for the office in question, or for the President and our dear country. The faceless individuals know where to take their complaints if genuine but they choose to tar the gentleman in the media in their feeble attempt to put a question mark on his acclaimed integrity, unblemished and exemplary record of service.

Yes, the Office of the Accountant General of the Federation should not be headed by any one of questionable character. The individual must also be really competent, and Mr. Anamekwe is integrity and competence woven in one and therefore best suited for the job. He is known for the practice of being honest, consistent and uncompromising in strict adherence to strong moral and ethical principles and values.

In ethics, integrity is regarded as the honesty and truthfulness or accuracy of one’s actions and therefore goes beyond morality. As a man of integrity, Mr. Anamekwe stands in opposition to hypocrisy, and will never yield to pressure to bend or lower the standards. Through the conduct of Mr. Anamekwe, one can see that integrity is about consistency and honesty as virtues, and shunning cutting corners or creating doubts as regards what one stands for. In this context, integrity is the inner sense of wholeness, deriving from qualities such as honesty and consistency of character and that is what Mr. Anamekwe indeed typifies.

Some see him as uncompromising, too strict and difficult. These qualities are also suitable for the office he occupies and for its critical mandates, making him spot-on. Apart from Mr. Anamekwe being tailor-made for the office, his confirmation will be yet another history made by Mr. President for appointing and confirming an AGF for the first time from the East. What is more, it will deescalate the resentment that President Muhammadu Buhari has not made any substantial appointments from the South-East. Adding somebody from the South-East who is overly qualified, Anamekwe Nwabuoku, to the mix, will be a win-win and a good measure enhancing the unity of our dear country, Nigeria.

This acting Accountant-General of the Federation, Anamekwe Nwabuoku, should not only be confirmed but given an extended tenure, given that this will be the first time South-East will be offered such an opportunity. His confirmation will, without doubt, be further glue for our nation’s unity.