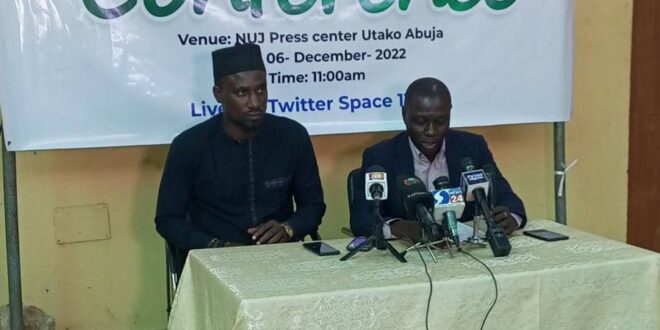 The All Progressive Congress (APC) Senatorial candidate for Kano Central in the forthcoming general elections, Abdulsalam Abdulkarim Zaura has advised the Economic and Financial Crime Commission (EFCC) to restrain from media Showcase of her activities.

Speaking with Journalists in Abuja Tuesday, Personal Assistant and spokesman for A. A Zaura campaign organisation, Ibrahim Garba Iceman
said contrary to media reports over threats to arresst the Senatorial candidate, his appeal is pending before Supreme Court.

He said A. A Zaura believes in the rule of law and so does not believes in cutting corners .

“In as much as we appreciate the Economic and Financial Crimes Commission’s (EFCC) role on the matter, we appeal for a fair hearing on the matter so that a proper investigation is done so as not to ridicule the process because of his hard-earned reputation which was earned through hard work many years now.

“Our principal is not evading court procedures but we appeal to a section of the media not to be biased on this matter. We urged them to please take a step further in asking the right questions so that facts can be established before rushing to the press.

“AA Zaura is first a Nigerian with all rights and privileges and also a man of honour that is testing the political waters. This too will make him stronger and more committed to his passion for mankind.

“We are also advising EFCC to reduce media showcase and focus on its Constitutional mandate as Zaura’s appeal was pending before the Supreme Court in appeal No.Sac/CR/45_/2022 The matter is adjourned to 30th January 2023”.

On the track records of the Senetorial candidate, “we are challenging every media practitioner to visit Kano State and verify since the return to democracy in 1999, if there is any young politician or businessman that has impacted the lives of the people positively in Kano State like AA Zaura”.