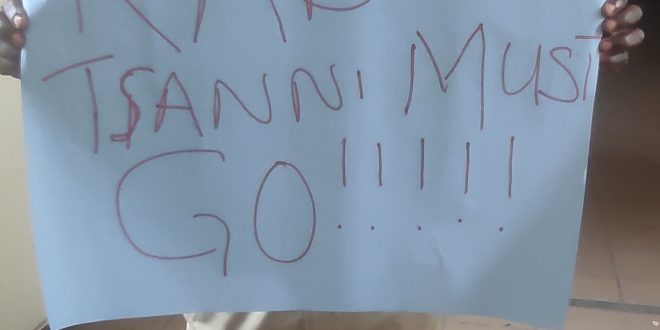 The Concerned Members and Stakeholders of Radio Television, Theater and Art Workers Union (RATTAWU) on Thursday demanded the removal of Comrade Kabir Tsanni led Central Working Committee (CWC) for disregarding the constitutional provisions of the union.

The group who made this known during a protest at the Ministry of Labour and Employment, allege that the purported Delegates Conference held in Zamfara state was illegal, and therefore called for the constitution of a caretaker committee to pilot the affairs of the union pending a proper delegates conference.

Leader of the group who is also former deputy President of RATTAWU, Comrade Pasmond Mgbebe said since 2019, no meeting was summon to ratify some provisions that allow for delegates conference.

Comrade Mgbebe further said the conference was illegal because no proper delegates was constituted , accusing the president, comrade Kabir Garba Tsanni of handpicking delegates for the purported conference.

“For instance, there are chapters, state councils that are not properly constituted to warrant their qualification of their chairmen and secretaries to participate in the delegates conference. There are lots of chapters and councils today that are operating on caretaker bases , some have lasted more than even the past administration, no elections and is a breach to our constitution because that is fundamental.

“Also for instance, even as a serving deputy President then, we went to Asaba in 2019, and that was the last time as serving deputy President that I was invited for a meeting , so since that time till now as I speak, I haven’t had any invitation or any chance for a meeting and that got to tell you what I said on the disregard to the rules because for a meeting as delegates conference to hold , there are ratification to be done by the two organs of the union, which is CWC and NEC but none of these was called to decide on the purported Delegates Conference”.

On why the choice of Labour ministry for their action, Comrade Mgbebe said “We have had some running issues over time raising from the high-handedness of the last regime , they disregard to rules and expecially our constitutional provisions.

“We run an organisation that is predicted upon our laws, we have rules that guide our activities and all of that and we found ourselves in a situation were there was total disregard to those rules that held us.

“We chronicles all of that ,all of the disregard to constitutional provisions and made it known to the Ministry of Labour and Employment, and the Ministry on its own wisdom saw reason with all that we have presented to them as a complaints and directed that the supposed delegates conference be put on hold.

“Also , on the wisdom of the Ministry also , they saw that as total disregard to a directives issued by them in their efforts in trying to sorting out the issues by asking that the conference be put on hold and to that disregard, we are aware that there is a memo pointing out that such conference was illegal.

“And we are here on the invitation of the Ministry for dialogue, but unfortunately we haven’t been communicated whether or not the proposed meeting is going to hold”.

The workers were seen with placards with different inscriptions ” Kabir Tsanni must go, caretaker national leadership must be put in place, Enough for the reign of Kabir Tsanni, and Ngige help RATTAWU”.

Others are RATTAWU elections 2021 cancellation must stand, RATTAWU must be free , save our soul Minister of Labour and Employment among others.

All efforts to speak with the president, Comrade Kabir Tsanni for comment proved abortive , as calls to his line didn’t go through.