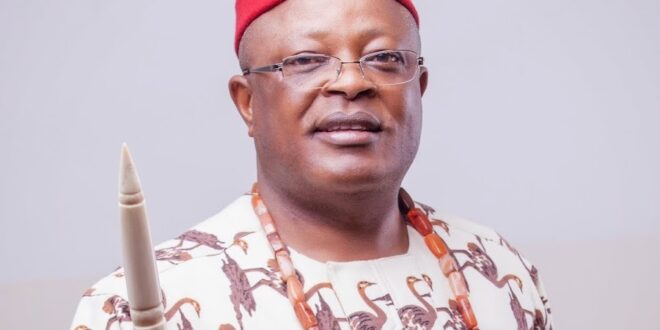 This development is coming 5-days to inauguration of the newly elected council chairmen.

The court sitting presided by Justice Fatun Riman in a suit No:FHC/AI/CS/151/2022
nullified the election for it’s unlawful processes.

The plaintiff including; Otu Collins Eleri, Hon Nelson Eze, Akaa Ikechukwu, Engr Micheal Ali, Engr Isu Amaechi had dragged the electoral umpire EBSIEC, INEC and the state givernment to court for not giving all the aspirants a level playing ground during the election.

Speaking to journalists shortly after the court processes, the Counsel to IPAC, Mudi Ehrenede noted that state government denied his clients the privilages of having the law in which the elections was conducted.

He said,” it is undemocratic and unlawful to conduct an election into the local government areas or council without availing the plaintiffs with the exact law that is meant to regulate the exercise.
There are alot of other issues with not compliance with the electorial act 2022.

If you look at it, how do you access compliance without law if you hide the law with which you want to conduct the election is it not when you make the law public that we will know wether you complied with it or not, how can you be making laws and hiding them.

“My position now is that my clients demanded to be availed of this law, we came under the freedom of information act it intending the procedure to conduct elections, we wrote to EBSIEC, we wrote the House of Assembly,we wrote to INEC whose responsibilities all of these bodies refused to provide us the law”.

Reacting to the case, the Special Assistant to Governor Umahi on Media and strategies, Chooks Oko in a statement said,” It is on record that none of the grounds of the litigants included nullification of the election but the court bizarrely came up with such an order.

“The election, generally acknowledged as peaceful and orderly, produced our incoming leaders at the local government level having followed all laid-down procedures to the letter”.