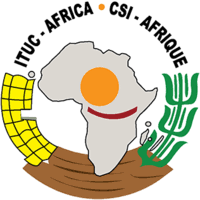 Comrade Kwasi Adu-Amankwah, the General Secretary of ITUC-AFRICA said in a statement lamented of the recent 7.2 earthquake that rocked southwestern Haiti that killed over 1000 persons and injured scores.

Brother Adu-Amankwah on behalf of its 103 affiliates and African workers expressed solidarity to all the Haitian people in these difficult moments.

“We call on other nations, including African countries to lend a hand to our brothers and sisters in Haiti. Similarly, we want to urge the international community not to tire in their support for the reconstruction needs of Haiti.

“Natural disasters are unfortunate reminders of the need and essence to build and strengthen the civil protection mechanisms in place in our countries and above all to put in place genuine disaster prevention programs, whatever their origins. In solidarity,

“We commiserate with those who lost loved ones and pray for the quick recovery for the scores who were injured and are barely able to receive the needed medical attention because of the earthquake’s devastation of hospital facilities and destruction of access roads.

“While search and rescue efforts are continuing, provisional figures from the country’s Civil Protection Services show that 1,941 persons have died and 5,760 were injured.

“The situation on the ground in the affected areas remain dire and worsening. According to the United Nations Children’s Fund (UNICEF), survivors are now living literally with their feet in the water because of the flooding caused by “Rainstorm Grace”.

At the moment about half a million Haitian children have limited access to safe water, shelter and food. This earthquake is exacerbating the humanitarian crisis that this country has been plagued with in recent years.

“African workers are deeply saddened to learn of the loss of lives and properties following this earthquake. It is yet another disaster for this country marked by climatic and political calamities. No doubt, this earthquake revives the terrible memories of the great earthquake of January 12, 2010, which devastated the capital city, Port au-Prince and several provincial towns and caused more than 200,000 deaths.

We are concerned for the psychological and mental health of the Haitian people. They have gone through a lot of successive harrowing experiences.

We salute the bravery of the security forces and the solidarity of each other to come to the aid of those in need. ITUC-Africa equally salutes the solidarity of many countries, including Venezuela, Panama, Colombia, the United States of America, the Dominican Republic, Mexico and Ecuador who have offered their assistance with the dispatch of personnel, emergency rations and medical equipment.
We also appreciate the donation of $8 million by the United Nations”.