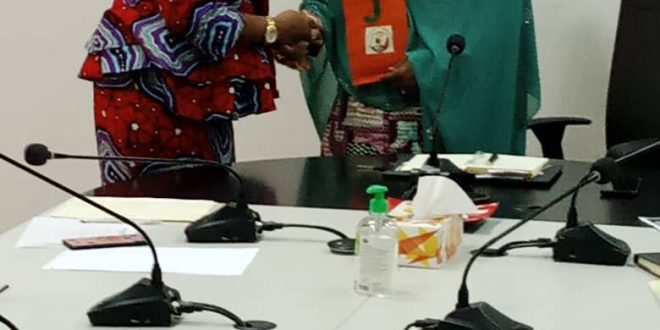 The Acting Executive Secretary of Federal Capital Development Authority (FCDA)Town Planner; Zalih’ua Ahmed, has seek for partnership with National Association of Women Journalists (NAWOJ), FCT Chapter to advance the issues of women and Children in the capital City.

the acting ES also called on Female Journalists to intensify efforts in educating FCT residents especially women and youth on the need to be law abiding citizen.

TPL Ahmed made this call when the executives of NAWOJ FCT chapter; led by its Chairperson Comrade Annah Daniel paid her a courtesy visit in her office in Abuja.

In a Statement signed by the Chairperson of NAWOJ FCT Comr. Annah Daniel and quotes the Executive Secretary as stressing the need for FCT residents to adhere to the guidelines enacted towards the development of the city.

According to the Executive Secretary , proper advocacy on the basic rules and regulations established to guide the FCT would foster development and growth of the area.

“FCT is established under an act, and its development is inline with proper guidelines that would benefit all”.

The Executive Secretary also pledged the support of her office in partnering with NAWOJ to advance the course of women and children as well as the general public.

Earlier in her Remarks, Chairperson of NAWOJ FCT, Comrade Annah Daniel who congratulated the TPL Zalih’UA Ahmed on her elevation as the Acting Executive Secretary of FCDA having served the organization well in various capacity, noted that women are transformational in leadership and when rightly positioned can deliver effectively.

The Chairperson explains the need for effective collaboration with FCDA towards promoting better welfare package and empowerment for women and most vulnerable segments of the society.

Among other prayers raised by her is for FCDA to help acquire land for NAWOJ to empower female journalists to go into farming such as fishery, poultry, grass cutter etc; to compliment their source of incomes and demand in the midst of inflation.

The Chairperson also reiterated the need for implementation of policies enacted to help alleviate the plight being faced by women and children in the country and also ways to curb the cases of violence against the women and children.

Highpoint of the visit was formal presentation/decoration of the Ag. Executive Secretary with NAWOJ FCT mophla