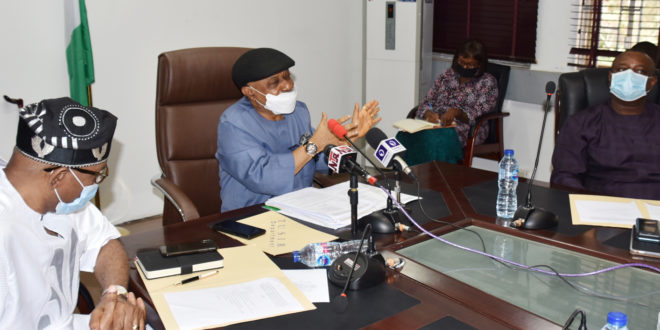 The Federal Government on Thursday, said the prolong industrial action by the Academic Staff Union of Universities (ASUU) has encourage the ongoing #endSARS protest and other civil unrest in the country.

Minister of Labour and Employment, Dr. Chris Ngige who was speaking at the resumed conciliatory meeting with the union said government is working tirelessly to ensure the matter is resolve for students to return to school.

According to the minister, government has done the first text out of the three to be done on the University Transparency and Accountability System(UTAS) platform presented by the union against the Integrated Personal and Payroll System(IPPIS) which has being the caused of the industrial action.

Ngige said, “For the past one week, we have all been on our toes, we have been meeting and we pray that this meeting will yield some good fruits. We don’t take very great pleasure, to the fact that the children who are supposed to be in school are being recruited into the #EndSARS, #EndStrike, #EndSWAT and all the kind of situations.

“As much as possible, we will try to see how we can meet ourselves halfway, so that we can resolve this crisis to the benefits of all and the country at large.”

He disclosed that government has commenced the process of testing UTAS which ASUU members claimed it accommodates the peculiarities of university systems, adding that all the three stages of test will be concluded within the time frame the union gave government.

According to him, “We have had the preliminary report and textrun on the UTAS, which is the University Transparency Accountability Solution. We believe that with that, we will be able to get it right.

“Let me make it clear to members of the press, we never said UTAS will replace IPPIS as some of you are reporting, No! The UTAS developed by them is for the University systems and they feel that it captures the peculiarities that are configured to accommodate all the peculiarities of the University systems especially as it affects the Professors and other teaching staff, and even the Non-Academic Staff. That is the situation.

“We, as government feel we are going to put it up for tests – three stages of test. We have done the first stage of test which is within the timeline of six months that ASUU promised. We are going to do other integrity test, Alpha test, Beta test and the one they call roll-over and other whatever test. It is the technologists that know all those tests. But this is the round we are going on now.”

Meanwhile the Academic Staff Union of Universities (ASUU) has said that the lectures are willing to return to class room but warned that there won’t be peace in the education sector unless is properly funded.

Speaking at the meeting, the president of ASUU prof. Biodun Ogunyemi said the union will not accept IPPIS as it does not captured the members peculiarity.

Meanwhile, the union directed all his members to reject IPPIS officials reportedly coming to various campuses on Monday for biometric data capturing of its members.

An official letter, signed by ASUU President, Biodun Ogunyemi, sent to all zonal coordinators and all its members, which was made available to newsmen yesterday’s evening, reiterated that the union will not jeopardize the ongoing critical engagement with federal government.

The letter partly read, “We have received information that IPPIS officials from the Office of the Accountant-General of the Federation will be visiting campuses as from Monday 19th October, 2020, for biometric data capture of academics.

“All ASUU members should have nothing to do with them. Fact-Check by ASUU with the figures from the OAGF has proven the claim that our members are trooping to enroll in the IPPIS in Abuja as false. The enrolled number is inconsequential.

“The leadership of our great Union is fully aware of the hardship the non-payment of salaries by the Accountant-General and other forms of intimidation by over-zealous Vice-Chancellors have unleashed on our membership and we are leaving no stone unturned to redress the situation.

“Therefore, all members of ASUU should STAY AWAY from anything related to IPPIS; so as not to jeopardize the ongoing critical engagement with the Federal Government.”