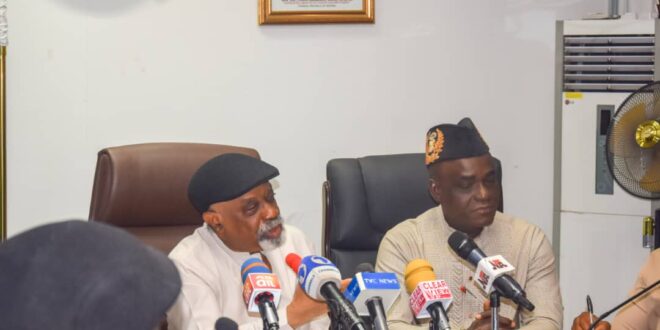 FG To Upgrade IAP To A Commission- Ngige

MJA 2 weeks ago Community Watch, Info...., Labour, News Comments Off on FG To Upgrade IAP To A Commission- Ngige 93 Views

FG To Upgrade IAP To A Commission- Ngige

The Minister of Labour and Employment, Dr. Chris Ngige has said that his Ministry has sent bills to the National Assembly among others for an upgrade of Industrial Arbitration Panel (IAP) to a full fledged commission .

Ngige who made this disclosure during a media parley with Labour Correspondents in Abuja Tuesday, expressed optimism that the National Assembly would pass the bills before end of February 2023.

Speaking further , the Minister said his Ministry would launch a labour statistics system where unemployed Nigerians at home and abroad, could apply for available jobs.

According Ngige , the labour Statistics is needed for tackling unemployment like that of the Department of Labour issues statistics in the United States of America.

“But over time that we have been here, it is not funded. You don’t also blame them. Everybody wants to build bridges and airports and go. But they forget that with labour statistics and matching, you can fight unemployment. With that you know who is where at any given time. And people abroad, especially those with specialties, who want to come back, can enter that system to know where to apply to for jobs,” Ngige said.

Ngige assured that the system will come up in the next one month or two at the Federal Ministry of Labour and Employment, for official launching in two months time.

He recalled that his ministry earlier established a labour exchange system for merging and cross-matching labour supply and demand in the country.

READ ALSO: NOTAP And Commercialisation of Research Results in Nigeria

“In our electronic labour exchange system, both people who are looking for work and recruiters can enter the system where we merge and match them. We do what is called cross matching and people are gainfully employed. This is facilitation of employment.”

Speaking further, Ngige said his ministry has gotten involved in some international projects with foreign partners, which Nigeria has not hitherto been doing, adding that for the first time, the American Government was putting up a grant for women and children in Nigeria and Liberia.

“We are fighting child labour. The American government has agreed to assist us. We have two programmes. One is for $5 million and another one for $ 4 million is specific to Nigeria for areas where granite, columbites and others, are mined. We have not been loud in announcing them because we don’t want the American Government to withdraw. When the programmes take off, we can announce.”

According to the minister, a Nigerian implementer has been appointed for the programmes while ILO will be rendering technical assistance.

While applauding the ILO for being up and doing in the area of technical assistance, he urged the organisation to sustain the momentum.

Other top officials of the ministry in attendance at the media parley include the Permanent Secretary, Ms. Daju Kachollom mni, directors and other unit heads in charge of various departments.