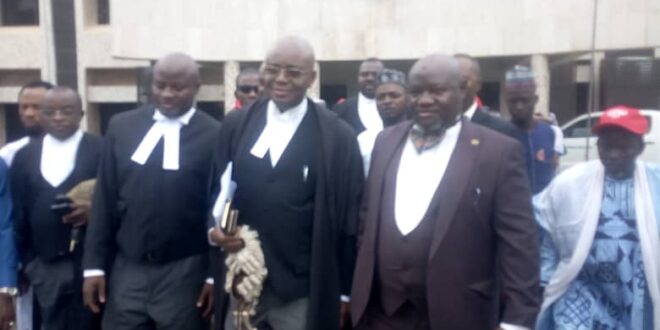 The delay of the flight of Justice Afolabi Nehizena, trail Judge of the Federal High Court Lafia has stalled the case against Shehu Tukur, Nasarawa West Senatorial candidate of All Progressives Congress (APC).

The News Agency of Nigeria (NAN) recalled that Barr. Labaran Magaji, an aspirant at the APC Senatorial primaries draged the party and the alleged winner to court for irregularities during the election.

Speaking to journalists shortly after the adjournment of the case on Wednesday in Lafia, Johnson Jacob, Senior Advocate of Nigeria (SAN), led counsel to the plaintiff, said the judge could not make it to the court due to challenges with her flight.

Also, Magaji, said the adjournment was not delibrate, but the will of God as the judge is human and such things are bound to happen.

The plaintiff added that he approached the court to seek for justice and justice should never be sacrifice for anything.

Magaji expressed hope that at the end of the whole thing, the court would do justice to the matter.

He therefore, urged his supporters to remain and deliver the party in all elections at the 2023 general elections.

On his part, Mubarak Adekilekun, counsel to the first defender (Shehu Tukur, APC Senatorial candidate) said the announcement was not the fault of anybody.

He said they would be in court in the next adjourned day to prove their case.

The case was adjourned to Sept. 7, 2022 for continuation of hearing.