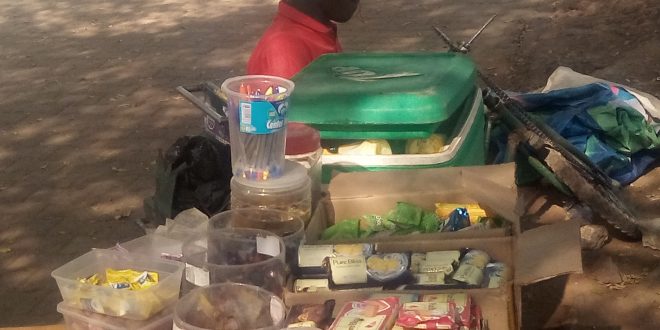 Peoplereporters engages a physically challenged petty trader Mansur Makau, who left street begging after he was arrested by the authority in the Federal Capital Territory (FCT)

The World Health Oragisanisation (WHO) estimated that People living with disabilities in Nigeria are about 28 million or approximately 15% of the country’s population. This is occasioned by both a cause and a consequence of poverty. There is also a strong relationship between disability and poverty with a cyclical tendency as poverty makes people more vulnerable to disability and disability reinforces and deepens poverty.

This particular set of people are often excluded from the mainstream of the society hence, may not contribute to the development of the society or optimally. It is widely believed that bringing people with disabilities into the development mainstream will have a significant effect in any plan to cut poverty in the country considering the number of persons with the challenges.

Driving around the Federal Capital Territory (FCT) and major cities in the northern part of Nigeria, mostly on traffic lights, you will see a number of persons with one disability or the other, begging for arms from commuters.

This writer took a special attention on a physically challenged young man on a wheelchair beside the ECO bank in Jabi, on your way from Life Camp to Julius Berger junction, in the FCT, because rather than capitalising on his disability, choose to do something for himself.

Probed into what he was doing shows that he’s selling soft drink, biscuits, sweet, recharge cards, biro, sachet water and many others.

Mr. Mansur Makau, a native of Kastina, in North Western part of Nigeria who spoke to our correspondent in hausa, said government should look into the plights of physically challenge individuals so that they can contributes their quotas to the national development.

Makau 18, told our reporters that life was never kind for most people with disabilities, stressing that most people like him choose street begging because they are treated shabbily by the members of the public.

According to him, the only relation he has is the elder brother is in Kastina state, after his both parents died. He said himself alongside others came to the nation capital to beg, but his breakthrough came after he was arrested by the AEPB authority.

He said he never foresaw him making on the average N3500 daily as a petty trader when he came to the nation capital in search for a greener pasture. The 18 years old accepted his fate and believed he cannot do anything to make a living unless from street begging, considering his condition.

Mansur, who has his two legs paralyzed as a result of polio, is presently on wheelchair.

According to him, his condition and perception changes after he was released by the authority that arrested him for begging on the street of Abuja. According to him, he started selling sachet water popularly called pure water, biscuits, and sweet beside ECO bank in Jabi with the little money he had.

Mansur, who is selling in an open place by the ECO bank opposite Fort oil filling station in Jabi, told our correspondent that he can do better if he gets a shop, according to him, raining season would be difficult for him to sale at the spot since there is no roof under his head.

He appealed to government and good spirited individual to come to his aid so he can secure a shop where he can do his business, while urging other physically challenge persons to accept their fate and do something instead of street begging.

“My name is Mansur Makau , I hail from Kastina, in Kastina state, I was once a street beggar when I came to Abuja because I wanted to survive like any other Nigerians but was arrested by the Abuja Environmental Protection Board (AEPB), I spent some days with them and was later released when I told them I won’t go back to the street for begging again. I said that so that I can be freed, but when I return I thought of starting a business instead of going back to begging. I summon courage and bought a bag of sachet water and today you can see what Allah has done. At least I am making up to N3500 everyday in this place, Alhamdulillah I am making progress my perception has change , I am thinking as someone that want to grow in business , and I know Allah will see me through.

“My parents are late, the only person I have is my elder brother who is in Kastina. I am appealing to government and other good spirited individuals to help me so that I can get a better place, you can see this is an open place, I thank Allah that taskforce don’t use to disturbed me like others who hawk on the street but if rain starts, it would be a serious issue for me. Also, other people who are physically challenged like me should not pity their condition but stand and do something with your hands because there is ability in disability.

“Also, members of the public should not despise people with disability; it is not their fault to be like that. Some are born like this while some is due to poverty and ignorant, and others are as a result of accident, show them love because they are human too.

“Today in Nigeria, So many people are given up in life because of the situation they found themselves. Let advice that you don’t have to give up, keep the struggle, certainly one day your situation would change for the better”.

Government agencies as National Directorate of Employment (NDE) and many others whose responsibility is to reduce the number of unemployment in the country as well as other individuals who may want to give back to the society can do something about physically challenges persons, because it is good to help those in need even if such a person cannot help you back.

Previous Discipline And Patience Are The Answers To The Questions
Next Shaye” , “Olo$” Are The Most Trendy Songs Online

Edo state Governor, Godwin Obaseki have said the antics by the National Chairman of …