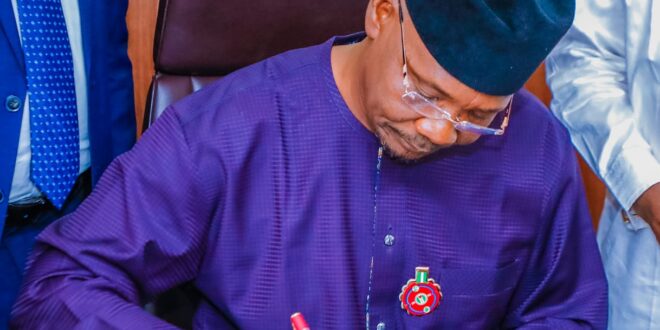 Governor Abdullahi Sule of Nasarawa State has described the late Chairman of Akwanga Local Government Area Emmanuel Leweh as courageous and a sincere leader who is committed to uniting people of the area.

Governor Sule stated this Friday during a condolence visit to the family of the decease and people of Akwanga LGA over the demise of the chairman.

The Governor in a statement signed by Ibrahim Addra, Chief Press Secretary (CPS) and made available to newsmen in Lafia, said the chairman has put Akwanga on the path of accelerated growth barely few months in office.

The statement further described the decease as a vibrant gentleman and visionary leader who made great contributions to the development of the council and the state at large.

He added that the Chairman’s contributions to the overall fortunes and growth of the All-Progressives Congress APC in Akwanga and the state are remarkable.

“In only a few months into his three year tenure, the young man has shown great courage, leadership and sincere commitment to uniting the people of the area and steering the council on the path of accelerated growth,” the statement added.

He said the dead of the Akwanga LGA Chairman is a huge loss to the Mada nation in particular and the state in general.

He urged youths in the area to consider the dead as the will of God.

He therefore, condoled the Mada nation, the people of Akwanga LGA, the APC family and the family of the deceased and urged them to pray for the repose of his soul.

The Chairman died on Thursday January 13, at a private hospital in Abuja, after a brief illness.

The deceased slumped on Monday January 10, while addressing staff of the council and was rushed to the hospital but unfortunately died in the hospital.