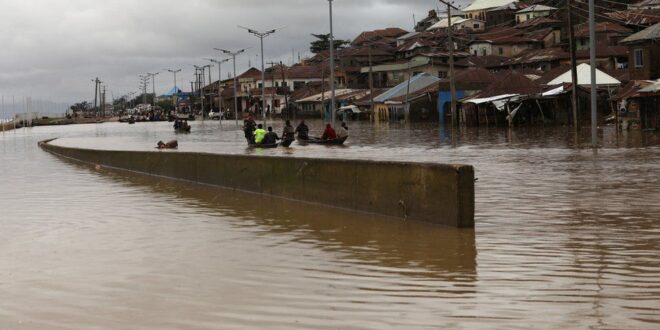 The group in a statement signed by the Convener, Bashman Mohammed also urged governments to urgently provide both relief and humanitarian materials for the over 2.5 million Nigerians who are displaced by the natural disasters.

GLU while expressing regret over those who lost their lives as a result of the flood devastation, further appealed for government to investigate the root caused of this year national floodings .

Parts of the statement reads “the Federal Government of Nigeria should (as a matter of urgency) declare a State of Emergency on the current national flooding. To this end, the Ministry of Humanitarian Affairs, NEMA and other National Emergency Support Agencies should be rapidly deployed into action to give succor to affected individuals, families, businesses, and communities.

“The Federal Government should undertake a thorough investigation into the immediate and remote causes of this year’s national flooding especially the role of negligence and poor management of inland waterways and water infrastructure especially the Lagdo Dam and the failure of the successive Nigerian governments to build catchment dams along flood prone waterways.

“The public inquiry should also make recommendations on how best to manage the periodic release of water from the Lagdo Dam.

“The Nigerian government should construct catchment dam/s to accommodate excess waters released from the Lagdo Dam. The Dredging of River Niger and River Benue should be accorded topmost priority.

“The Federal government should increase the sensitization of communities, especially those in flood prone areas about climate change and how human activities such as poor waste disposals can aggravate the prevailing climate emergency.

“Also, the Federal Government should engage and deploy experts on waste management in communities to do the needful.

“Considering the humungous threats to lives and the socio-economic wellbeing of Nigerians by the devastating floodings, we urge the Federal Government of Nigeria to pay victims of the floodings adequate compensation for lost lives and properties destroyed.

“Government should also ensure that relief and humanitarian materials reach the over 2.5 million Nigerians displaced from their homes by this flood. Given the threat of massive outbreak of malaria, cholera and other water-borne diseases, government should make the distribution of malaria nets, anti-malaria drugs, as well as water disinfectants topmost priority this season.

“Nigerian citizens should be conscious of and adopt climate-responsible behaviors such as proper waste disposal, clearing of drainages, and avoiding the obstruction of water ways”.