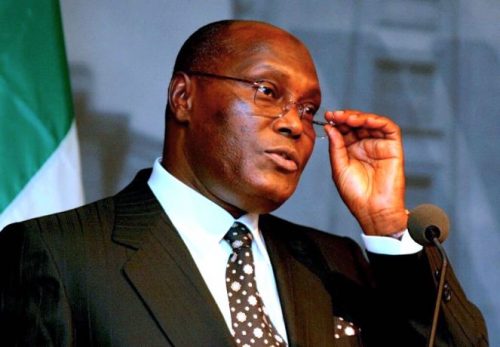 HURIWA, in a statement by its National Coordinator, Comrade Emmanuel Onwubiko, said Atiku’s emergence was allegedly heavily compromised by undue monetisation and the PDP delegates gave their candidate slot to the highest bidder. HURIWA said it was disappointing that Economic and Financial Crimes Commission operatives only showed up at the venue of the Primary election at the MKO Abiola Stadium Abuja as if they don’t know that bribery of delegates take place usually outside the confines of the venue and wondered why the EFCC failed to use Intelligence led investigative skills to catch both the alleged bribe givers and takers before they arrived the stadium to consumate their classic political corruption.

The group, therefore, warned the second biggest party, the ruling All Progressives Congress, to move against a northern candidate and make a southerner especially a candidate of SOUTH EAST EXTRACTION its presidential flagbearer in the spirit of fairness and to preserve the unity of Nigeria. HURIWA warned that should APC concede her ticket to North it therefore signposts the end of Nigeria as a UNITED COUNTRY.

With the extension of the deadline for the submission of names of presidential candidates by the Independent National Electoral Commission, the APC moved its presidential primary from end of May to first week in June while Nigerians keep a watchful eye to see who the party will put forward.

According to reports, each of the 767 national delegates that voted at the MKO Abiola Stadium, venue of the presidential primary, got at least $35,000 allegedly from Atiku and the other northern contenders including former Senate President, Bukola Saraki; Bauchi State Governor, Bala Mohammed; Sokoto State Governor, Aminu Tambuwal, who later stepped down at the primary ground to donate its delegates’ votes for Atiku. This allegation is yet to be debunked by the individuals so accused.

Reacting to Atiku’s emergence, HURIWA flayed the shenanigans of the PDP delegates in Abuja on Sunday.

The withdrawal from the PDP race by former Anambra State Governor, Peter Obi; and businessman Mohammed Hayatu-Deen; who both said the PDP had monetised the process suffices that the presidential primary was nothing but corruption fiesta.

“As seen by every Nigerian of conscience, bribe in dollar dominated the PDP primary. It will be terrible for the economy if such bribed-induced candidate is elected Nigeria’s President unless the EFCC can commence investigation and then come up with a different determination.

“HURIWA condemns the conspiracy of the Economic and Financial Crimes Commission that pretended that it doesn’t know that bribes exchanged hands. The anti-graft agency sent its operatives to the primary venue but the exchange of dollar still happened as seen in several media reports. How shameful! HURIWA urges the EFCC top echelons in Abuja to prosecute the over 700 delegates that voted on Saturday/Sunday.

“The process that produced Atiku Abubakar is flawed and the decision of the party to retain its presidential candidate in the north is a regrettable step that won’t bring stability, peace and unity in Nigeria.

“There is no longer any basis for anyone to preach unity in Nigeria when the South-East is ostracised politically and then the North continues to insists on producing the President of Nigeria for 16 years if another northerner is produced in APC after the eight years of President Muhammadu Buhari who is from Katsina State in the North-West.

“HURIWA urges the APC to give its ticket to the South-East or at least the Southern region so as to preserve the unity of Nigeria or else if APC goes North like PDP, it is a vote of no confidence on the continuous existence of Nigeria.”