Breaking News
Home / Info.... / I Will Disown You Once You Join Police, Says 71years Journalist detain For 28-dayS 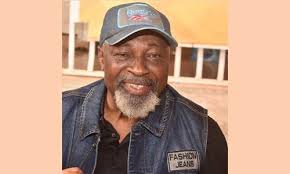 I Will Disown You Once You Join Police, Says 71years Journalist detain For 28-dayS

An ace journalist and the publisher of Power Steering Magazine, Comrade Tom Oga speaks with PEOPLEREPORTERS on his detention which was ordered by the Minister of State, Power, Goddy Jeddy Agba. Excerpt.

The experience is a familiar one because I have been through all these things, several times so it’s not new. I have my mind made up when I was going, so police usually will tell you don’t worry, we are just going to interview you, interrogate you, and let you go, but I was prepared, both mentally and otherwise I was prepared, so I went with my beddings as well as my high blood pressure drugs and things I needed. The only thing I didn’t know was that I didn’t know I was going to stay this long. I thought that the government was in touch with the minds of the people and they were going to work the talk with the constitution that says, you can’t detain a man for more than 48 hours. So I was prepared that no matter how naughty they were going to be, they were not going to keep me beyond 74 hours or thereabout. But I ended up spending this long.
My experience from the detention, just like I said, from the point, I was arrested, I knew my right, they arrested me in front of my house and I told them I wasn’t going anywhere until I see my lawyers. They wanted to force me but I told them I know my right and I wasn’t going anywhere. They tried to bent the law but I insisted, we had to go to my lawyer’s office from there between my house and the office, I got in touch with the union, the union met me in my lawyer’s office before they took me to the station. It was at the station that they spent the whole part of the day interrogating me asking me stupid questions and things that were not relevant to the point they were trying to make and at the end of the day, I wasn’t taken unaware. By the time was evening they said don’t worry, it’s now late, the usual trick, then they took me to custody and spent the whole day in custody.

The next day, they said they were taking me to my doctor, I resisted that I wasn’t going anywhere or leaving the cell to go with a team of over 4-5 detectives and only me in their car, my lawyer must be aware and I insisted. So the issue is this, my detention has actually shaped their usual treatment in the headquarters there. So many things that were in practice have been changed through my agitation. Even the feeding system, I told them they cannot give the kind of food they are giving people in custody to their pet. And my going to the custody actually paved the way for people to live a better life, because each time my family brings food for me, they’ll bring food for more than 10 or 15 people and that was how it happened for this last 28 days, including last Sunday. I had to feed everybody last Sunday that was in custody.
When I was there, I changed so many rules, and that’s what we journalists should do. We shouldn’t be afraid to be arrested and taken into custody, when you go there and see the things that are wrong, you can come out, report them. You see when people talk about Buhari, he cannot be everywhere, media is supposed to be the first eye of any government, Buhari cannot put his ear everywhere, he can’t sense everything but when people like us go into certain areas, we can go in there and tell the whole world what is happening there.

POLICE REFORM
It will take a big task for the police to be reformed. The police reform we are talking about is not what matters, but we have to reform our characters as a nation, but when you say the police is bad, it’s not about that. Your training from home and your background from home is a reflection of everything there.

Since I went in, yesterday was the first day I saw the lights of the day, the only day I came out of my detention was when I was taken to the hospital at about 12:45 am.
BLACK MARKET INJUNCTION
Police in their illegality went and obtained a detention warrant for my detention outside the jurisdiction, outside the federal capital territory that’s Nasarawa state to come and detain me. Police are in collaboration with our oppressors and our corrupt people, they can do anything, and they can bend laws and change rules. They can change anything as long as it fits them and it’s very bad and unfortunate.

He that must come to equity must come with clean hands, the man in charge of the Police Service Commission today is Musiliu Smiths, During Smiths’s, I know the gravity of police brutality and hostility wouldn’t be as much as this one, but they were the people that actually instituted police brutality and hostility. So how can you bring somebody like Musiliu Smiths to come and reform institutions to which he laid the foundation for the destruction, to reform this agency, you need fresh young people with brilliant ideas who are in touch with the global practice. The Nigerian police, to even say the least, police force started with the name, police force from the institution by the British to oppress and to handle us in a crude way.

The reformation of police will be awesome, pay, or encourage people to go into the police; you have to make it attractive in such a way that when you ask people to join, they’ll join. Make it attractive like the Armed forces so that when people go in there, at the end of the day, it will attract retirement benefits, and also while you’re still in the system, you can still enjoy the benefit of serving your country. So you’ll make Nigerian police attractive, remove the force when you keep the force, you’ll make the system look that way, the reform should be in a way that it would be user friendly, Nigerians, we enjoy the use of the Nigerian police and that way. We should put an attractive remuneration.
I have made up my mind that anybody from my family that enlists into Nigerian police will be removed as a member of my family.

My people have an adage that you don’t use “I go fuck you to threaten an old woman” a woman who has seen it all, so you can’t use “I go kill you” or “I go lock you up” to frighten a 71-year-old man, I have seen it all and nothing will frighten me, so I will continue to do it more.