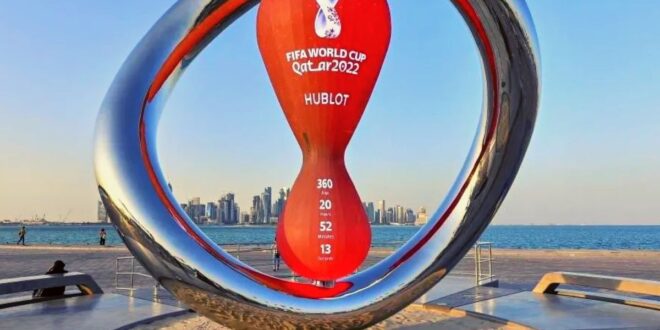 The International Trade unions Confederation , Africa regional office has frowned at what they described as a renew attacks on the Qatari labour laws .

The Deputy General Secretary ITUC-Africa, Comrade Joel Odigie while reacting to the recent attacks few days to the World Cup, said what the country need now is support so as to sustain the tempo.

According to comrade Odigie, the reforms in the labour laws being carrying out by the Qatar is a work in progress, adding the recent attacks and sustained campaigns from people Trade unionists within the Middle East is “anti-progressive”

Comrade Joel Odigie called for the donation of practical support where gaps have been noticed, stressing that he hadn’t seen a single suggestion of an alternative solution, save outright condemnation, which lacks substance.

He further disclosed that during a fact-finding visit with the International Trade Union Confederation (ITUC-Africa) in February this year, the African unions indicated that Qatar was improving workers’ welfare.

“in February this year, a delegation of African leaders visited Doha to ascertain the state of reforms on the ground. And this delegation, after the mission, issued a statement which affirmed the genuineness of the reforms in Qatar.

“The mission affirmed that the reforms are working, and the delegation called for further support for Qatar to continue to improve. And as we have seen, no country in the entire Middle East has made any reform closer to what Qatar has achieved. And we thought that the state of Qatar should not only be applauded but further encouraged to do more.

“That these attacks against the state of Qatar is unbelievable; it is unacceptable. And the more we continue to see these kinds of attacks on Qatar, the more it becomes believable that the attacks are motivated by racism. As a Muslim nation and, of course, as a small nation. Nigeria’s former Senator, Shehu Sani, in a tweet (@ShehuSani) he sent two days ago, affirmed racism against Qatar being a Muslim nation.

“for us, we are happy with the level of protection African migrants are getting, and we are excited because there is an assurance to do more to continue to protect them, and we are ready to work and support the Qatari government to continue to improve”.

“We are looking out to Saudi Arabia and UAE for similar things, given that they are bigger economies in the region. These economies have not done One-tenth of the reforms and progressive work that Qatar has done. Qatar has completely flipped its kafala to a progressive human practice contrary to what we have in the entire region.”

It would be recalled that in August 2020, Qatar became the first country in the Gulf region to achieve the abolition of the Kafala system in August 2020. The reforms were undertaken in a collaborative, inclusive and genuine manner. The International Labour Organisation (ILO) was the leading institution coordinating the reforms.

All these actors applauded the genuine efforts and results recorded by Qatar. Of course, Human Rights organisations such as Human Rights Watch and Amnesty International equally monitored the processes. The reports from all these organisations pointed to commendable and encouragement for the gains to be sustained. Not a few people are shocked concerning the renewed attacks against Qatar.