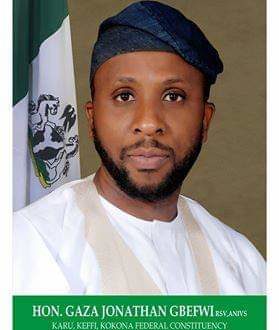 The Member representing Keffi, Kokona and Karu Federal Constituency of Nasarawa state, Hon. Jonathan Gaza has described the allegation by Karu Local Government Area Chairman Hon. Samuel Akala, that he mobilise youths to attacked the Secretary to the State Government, Barr Musa Abdullahi as a fabricated lies to cover the truth.

The lawmaker in a statement Wednesday in Abuja, accused the duo of SSG and the LG chairman of planning to alter the results of the last Saturday Governorship and state Assembly election in the state, but was prevented by youths who insisted that their votes must count.

According to the legislator, ” I arrived the Local Government Secretariat after receiving a call at about 12:00 noon on Sunday 10th March, 2019 intimating me of the presence of the SSG at the Karu LGA collation center.

“On arrival at about 1:00pm, I met a large crowd of youths and security operatives at the gate, making my way in, I saw the SSG and the LGA Chairman standing together, while passing I met the collation officer who was being escorted out.

“At this juncture, I stopped to inquire the position of the declaration from him. While giving an explanation, he was interrupted by the Deputy Commissioner of Police (DCP), who said he was there to maintain peace and security of the area”.

Speaking further Gaza said “To my greatest surprise, instead of going back to the collation center or an INEC vehicle, the collation officer entered a vehicle belonging to the SSG which already had the SSG and the Council Chairman seated in it.

“This singular act irritated the Youths which then led to a protest that made the Security operatives force the collation officer out of the SSG’s car”.

The lawmaker expressed displeasure over the allegation, and wandered what was the SSG doing at the collation center if is not to change the results of the election.

“The questions begging for answers are; Is it a crime for voters, having exercised their duties to stand by the gate and wait for the announcement of the results?

“What was the SSG of the State, doing at the collation center, does he have legal bases to be there? Is there any legal justification for a collation officer to enter the vehicle of the SSG along with the Local Government Area Chairman to convey them to the Lafia, the state capital?

“I will appreciate it if the Local Government Chairman can concentrate on his official duties and desist from attacking my person and integrity as this is not the first time he has done so. I think it is rather unfortunate than an official who was elected to superintend over the affairs of the youth in his Local government, will end up classifying the same youths as thugs”.