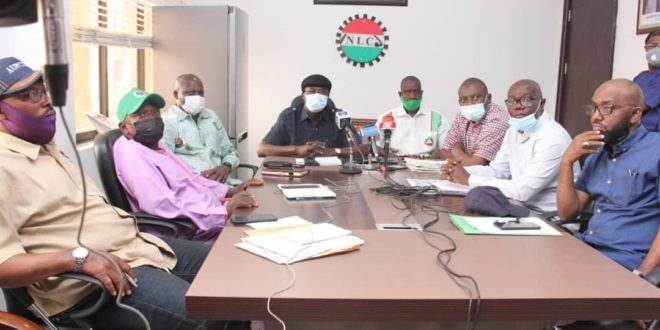 Labour and it’s Civil Society allies has announced plans to engage government and other stakeholders on transformative governance.

This was made known during the launch of a campaign for Transformative Governance in Abuja Tuesday.

Speaking in an interview a Co-convener of the campaign, Comrade Jaye Gaskiya said the move became imperatives due to the fact that Nigerian government at all levels has faild to meet the yearnings and socio-economic of the Citizenry.

Comrade Gaskiya said it is unacceptable for a country with vast human and material resources would be ranked among the poorest in the world.

According to him, the campaign has been established to reverse the negative trend and downward spiral.

He said the team which comprising of Trade Union (TUC) , Amalgamated Union of Public Corporation Civil Service and Recreational Service Employees (AUPCTRE ) Federation of Informal Workers of Nigeria (FIWON) and the pro- Labour Civil Society organisations would achieve this through three thematic areas which are ensuring accessable and effective public service delivery, ensuring political education of citizens for Transformative Governance and promoting and enhancing human security as a panecea to the endemic insecurity in the country and ravaging poverty and devastating conditions of the people.

Th activist added that the group in engaging both the Executive and Legislature “We will do advocacy visit, protest , town hall meetings, we are going to do every means necessary to make sure that they listen.

“We are very clear that the crisis facing our country today, whether political, social or economic, they are all crisis one can trace to the failure of governance and the collapse of leadership, that’s why our proposed alternative to that is for governance to become transformative.

“And i will define Transformative governance as governance that enhances the conditions of living, of working and of existence of citizens and defines the citizenship of the people and that kind of governance can only be provided by a different set of leadership, that kind of leadership has to come directly from the people who has suffered the brunt of this collapse and so what we then hope to achieve is that by taking this message to the people, by explaining what this transformative governance is in terms of public service delivery and in terms of our consciousness and our own awareness so that we don’t get defrauded by charlatans, by influencing the direction of governance in this country it means putting pressure on the present government to their demands, but also ensuring that we are engaged in a process than opens up the political consciousness of our citizens so that they can make the right choices at election.

“So that’s the way we plan to do the campaign. And as you’ve noticed there are four convening categories in the campaign, two are trade unions, from the NLC we have AUPCTRE, and the entire TUC federation, and then we have the federation of informal workers of Nigeria (FIWON), and we have the pro-labor civil society components.

For political office holders, we will engage the legislature, we will engage the national Assembly at the national level on many issues, particularly on public service delivery and on giving legal teeth to some of the provisions of of chapter 2 of the constitution, because now they say is not justiceable but the constitution also says that you can make laws to realise the provision of chapter 2 just like we did with education, and health.

“So we will engage the executives in terms of their policies, and one of the policies we will engage them on is the policy of universal health coverage and then also the national security policy and architecture, we believe that healthcare must be available, it must be accessible to all citizens, that’s our concept of universal coverage and it must be converted, and there’s no way we will achieve good healthcare by relying on private insurance, so it has to be publicly driven, so we are proposing the NHS, the U.K model”.