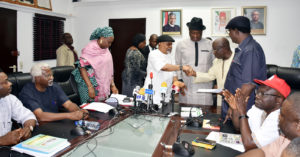 Agitations for wage review in Nigeria recently gained national currency thereby necesitating the singing of a national minimum wage bill  in April this year. By this new law, government workers  from Grade level one to six are entitled to 30,000  as against 18,000 that held sway in previous epoch.

While many greeted this development with fanfares, workers in the private sector were gnashing their toths in regrate. This public outburst of theirs made room for broader consultation to the ministry of Labour and Employment.

In one such visits by the United Labour Congress, leader of the delegation, Comrade Joe Ajaero appealed to the Minister of Labour  and Employment saying

In the light of the above, Dr Ngige responded in affirmity saying

“They say that time heals wounds, for me I think the time has healed most of the wounds in the labour industry. Visa vice government, unions, and employers.

“Today, we have a minimum wage law. So at any point in time, let nobody shun social dialogue.

“On the issue of expertrates quotas and foreigners taking jobs that are due for Nigerians. The two things to tackle in this next level administration are as follows: first, at the federal executive council, we have agreed that any contract that is being done for the Federal government of Nigeria must specify the number of jobs that are being created for Nigerians. We went further to say if the company has foreign needs, they should also indicate what quantum of foreign jobs are available. This is our way of creating more jobs for Nigerian professionals. Secondly is the local contents which also specified that the jobs must have Nigeria human and resources contents.

“All the unions should create inspectorate departments which will work hand in hand with the inspectorate department of the federal ministry of Labour and Employment and all the states. All Directors are directed in this dimension to work with you, go into factories, companies and industries with a view to looking at the books which will show staff disposition. They will also show what salaries people are earning. With that, we will be able to know if Nigerians are not underpaid and to ensure that minimum wage and consequential adjustments is implemented.

“This will also help us in checking casualization and contracts staff. We will make sure the terms are not inimical to the workers”

Meanwhile, the minister differed with Labour on demands of 500 billion monthly for consequential adjustment 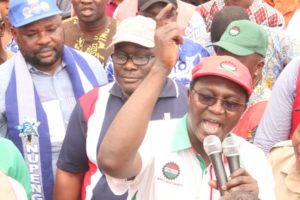 As if these assurances from government were not enough, the organized labour gave the federal government October 16 to either meet up the demands of workers or face industrial actions. Here is what the conciliator said

“I am surprised that NULGE chapters and even State chapters have not
open negotiation with state governments and council chairmen on the issue of National Minimum Wage Act.

” It is a national law of 2019 and
it should be obeyed by all. The discussion we are even having here is
for the federal implementation”.

“I am surprised that NLC and TUC in the states said they are declaring
strike in states without having dialogue with state governments. It
shouldn’t be.

“They should dialogue first and if it fails, they can talk of strike. Strike is not even the end of a dialogue. The minimum wage itself is for the persons on grade level one step one.

“I am your friend and friend of government. In fact, government feels I am not doing enough. That is why I am talking to you so that you can
talk to your people.

“We cannot allow government to shot down the economy because it wants
to pay salaries and wages”. Ngige said

This diplamatc approach by the minister paid off thus

“I can assure you that its a peaceful deliberation as can be seen from the smiles on our faces. I want to appeal to us to adopt social dialogue as recommended by the International Labour Organization (ILO), that is the best mechanism for resolving industrial disputes”.

The minister’s position was further corroborated by the NLC deputy President, Comr Amaechi’ Asugwumi when he says

“For us as labour, I think the matter is a straight forward matter, that is why we want to belief the negotiation is still ongoing. To the best of our knowledge, the struggle will still continue. So far, commitment has been shown, but we believe that the areas that are still in contest are critical therefore government is urged to on their part see how they can shift grounds positively in order to mitigate the agitations ahead”.

Ag. Head of service, Dr Folashade Yemi-Esan responding says “We had very peaceful deliberation today. The labour side has discovered that its just one side that is remaining which is the welfare of workers, so we will work very closely to resolve the issues. Both sides have made a lot of concession but we discovered that there are some gray areas that need to be ironed out, so some documents are going to be studied” she added.

Nevertheless, all efforts at the 2pm meeting hit brickwalls after intensed negotiations that lasted till the early hours of the morning before the honourable minister announced it adjournment

“We are still deliberating. From our technical session we broke into committees. We are adjourning the meeting. We are giving assignment to some people on both sides and there will go and do the work and get back to us. The work involve is enormous so we are giving them the entire day to get back to us”. We don’t want to make mistakes that could be fatal thereby putting the whole exercise we have done in jeopardy. Therefore, we have consensually agreed that we will reconvene this meeting at 7pm today. Like I said earlier, this will enable those that we have given assignment to complete the assignment and bring them back to us. Our relationship is very cordial. Nobody is fighting. So let the work continue. We will welcome you back at 7pm when we reconvened here. Thank you”.

Responding unbehalf of the union, the NLC President, Comr Ayuba Wabba says “It is the collective bargaining process that have actually lasted this long. Some progress have been made but we have not been able to conclude on collective bargaining agreement and some committees need to do some computation. You can see that they have worked up to the early hours of today, that is in the true spirit of bargaining which is give and take and that is what we are trying to do and to ensure that we get the process concluded and then put everything behind all of us. Our practice is that until we are able to conclude the issues, and then we are able to inform them appropriately, we can’t say its a collective bargain. But we can’t disrupt the process midway when we are already making progress.

“For now, we have adjourned to reconvened by 7pm today. Therefore progress is been made and at the appropriate time we should be able to give the details. The 16 October ultimatum was to convey a meeting and address the issues. We are already on the table trying to sort out the issue. Every dispute will actually be concluded on a round table which is what we are trying to do.

“we are on the negotiating table. We are discussing, once we are true, the details will be made available to all of us. But I can say clearly that we have been able to make some progress and by the time we conclude, the information will be made available to all of us. On the areas of progress, we are talking about one issue which is the issue of implementation of the minimum wage and that of consequential adjustment. So that is the only subject matter for consideration. That is the subject matter that we are trying to conclude to ensure that there is an agreement which we can then use and also share with you. We will be able to give you that information at the appropriate time at the end of the process”.

On the day of agreement signing, the embiance at the ministry of Labour and Employment was that of good tidings and conviviality as apples and other small chops were used to entertain delegates from both sides including the media before the angelic appearance of Dr Chris Ngige who was  adorned in all white to complement the atmosphere so created. The minister of State for Labour and Employment, Festus Keyamo SAN, was on his ever joyous mood and hospitality to calm fraying nelves.

The Mou was eventually signed in the early hours  of Friday at the admiration of all present with a pledge by government to ensure swift compliance. This goes to say that diplomacy and social dialogue  can achieve what guns and arrows cant.

Dr Chris Ngige has set another pace by knowing, showing and following the way of social dialogue and diplomatic conciliation.

“Today, we have a minimum wage law. So at any point in time, let nobody shun social dialogue”. Ngige said