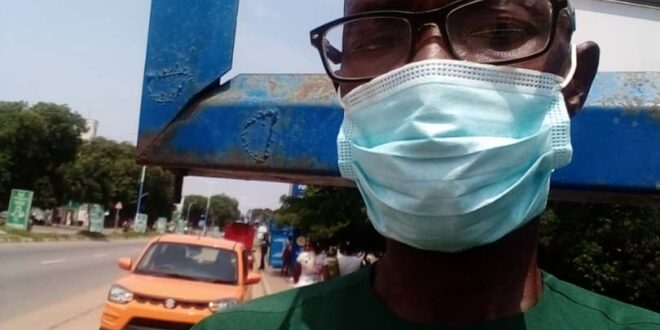 Migrant Labour General Workers’ Union International (MLGWUI) has called on the Ministry of Roads and Highways, Accra Metropolitan Authority (AMA), District Assemblies, Signage and Advertising Associations to team up to remove old/unused and unauthorised signboards or billboards from roads and streets especially from pedestrian pavements.

The called was made by a victim, Justice Ntarmah who has sustained injury, cut/wound on his forehead by an old remain erected signboard at the Adabraka Polyclinic Bus Stop on Wednesday August 24, 2022 morning.

According to those road/ street vendors around whose saw profuse blood flowing from the victim’s face, said “this unused signboard wounds many pedestrians and this is not the first time and you are not the first victim.”

They said signboard covered pedestrian pavements and below human height from ground to hanging lower part at that particular area (see pictures of victim).

In God’s plan, not everybody is for using a car in life, hence He has given knowledge to engineers and certain people wisdom in road and city planning to plan for pedestrians movement on road and streets. However some authorities are not doing their work with supervision.

Justice and others become victims to someone’s unprofessional earned work. And if an action is not immediately be taken, it will be the turn of some authorities’ relatives, or tourists or foreigners.

MLGWUI advised the authority to set up Signage standard measurements, heights, right post/positions and life span/period of each erection of signboard on the road or street sides to avoid causing harm or accidents to motorists and pedestrians.

“As Ghana hosts as the headquarters of AfCFTA and well recognised tourism hub in Africa, MLGWUI appeals to concerning authorities to immediately form an operation team as part of AMA and assemblies Operation Clean Frontage activities to remove wrong and unauthorised signboards on Major, Highways, Urban roads and streets.

“Despite of political competitions on projects or infrastructures among major parties in Ghana, MLGWUI has evident that Media play important role in nation building as authorities cannot do it all without Media collaboration.

“It is therefore the humbly appeal of the MLGWUI to Media to go and see the said signboard at Adabraka Polyclinic Bus Stop and report to the authorities to find out the responsible Signage Advertiser as well as go rounds to check all signboards or signage billboard objects wrongly erected throughout the country in view to reduce preventable accidents”.