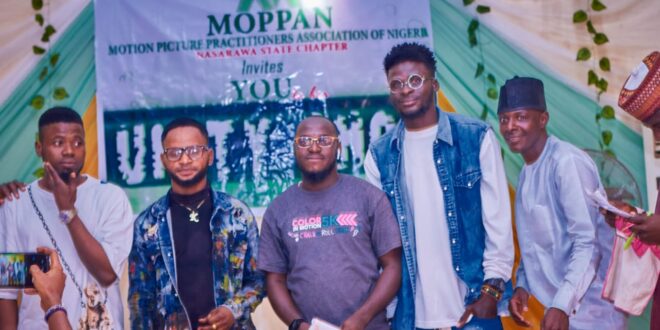 The Motion Picture Practitioners Association of Nigeria (MOPPAN),
Nasarawa State Chapter, has unveiled various guilds under its umbrella in the state and assured of robust enabling environment for artistes’ development.

Abdullahi Amwe gave this assurance during the unveiling of Guilds and “Unity Show” organised for its members to showcase their talents in Lafia. 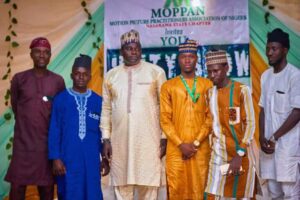 Amwe said the essence of the show tagged: “Unity Show” was to identify, showcase as well as promoting both stand up and up and coming artistes to foster unity among various artistes in the state.

According to the Chairman, Nasarawa state is blessed with the talented artistes cuts across the 13 Local Government Areas of the state that can favorably compete with outside artistes in the country.

READ ALSO: Never Allow Your Background Put Your Back On The Ground – Emmanuel Joshua

“What are we doing here today is unity show, it is being organised by MOPPAN for its members cut across the 13 Local Government Areas of the state, the essence of the show is promote unity among artistes as well as showcasing their talents,” he said.

The MOPPAN State Chairman, while commending the state government under the leadership of gov Abdullahi Sule for supporting entertainment industry in the state, he encouraged artistes to come out and take advantage of the support to showcase and promote their talents.

“Government of the day is trying in the area of support, it has taken entertainment industry to the next level, plans are also underway by government to build film village at Farin Ruwa water falls, when this happens we are going to be a beneficiaries,” he said.

He encouraged all the artistes in the state to register with MOPPAN so that it could promote, showcase their talents and protect their interest respectively.

Some artistes who spoke with the newsmen; Ibrahim Sani, Isa Abubakar and Salisu Mohammed both thanked the MOPPAN for providing a platform to showcase their talents.

They also appreciated Gov Abdullahi Sule for various supports Nasarawa state artistes have been getting from the state government.

Previous Traditional Ruler, Other Stakeholders Loud UNICEF On Girl Education In Niger
Next Low Rates Of Breastfeeding Cause Over 10m Avoidable Childhood Diseases In Nigeria- Study