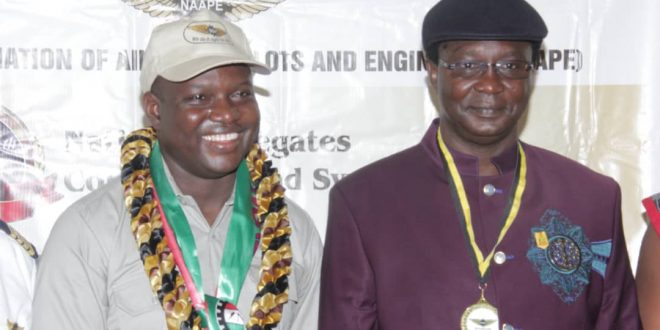 NAAPE Calls For Upward Review Of Remunerations Of Pilots, Engineers

The National Association of Aircraft Pilots and Engineers (NAAPE) has called for the upward review of the renumerations of Pilots and Engineers with Nigeria College of Aviation Technology (NCAT) Zaria to be at per with her counterpart in private aviation establishment.

The association who made the appeal in a communique issued at the end of it’s National Executive Council (NEC) meeting in Abuja said this is necessary to prevent these set of workers resigning from NCAT.

The communique which was signed by the president Comrade Abednego Galadima also called for training and retraining of pilots and Engineers in the country.

“Also, some of these recruitments are often not done in accordance with approved documents such as the Public Service Rule, Condition of Service and Scheme of Service.

“NAAPE frowns at this anomaly and hereby mandates that all concerned employers should not only remit such overdue staff pensions into the respective Retirement Savings Account (RSA) of staff but also ensure that the requirements of the Pension Scheme are always strictly adhered to.

The AMEL is issued by NCAA based on the Nig.CARs. Therefore, any designation other than an engineer that is given to these license holders would be perceived as a violation and should stop with immediate effect”.