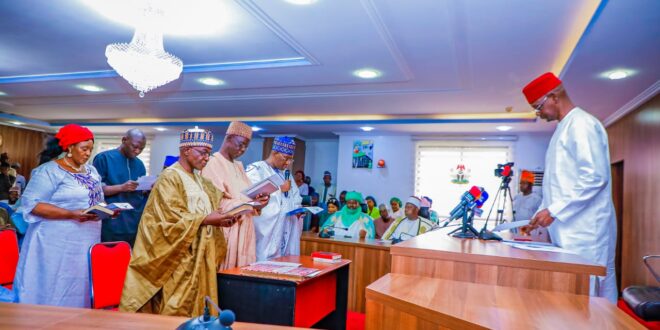 Nasarawa State Governor, Engineer Abdullahi Sule, has inaugurated a high-powered committee on the creation of additional districts and village areas in the state, as well as resolution of chieftaincy and territorial disputes and other related matters.

Engineer Sule inaugurated the committee during a ceremony which held at the Government House, on Friday.

According to the Governor, setting up of the committee became necessary following numerous requests from various communities for the creation of additional districts and village areas.

Engineer Sule added that, the constitution of the committee is also intended to resolve the conflict arising from the composition and territorial boundaries of the existing chiefdoms, districts and village heads in the state.

He explained that, setting up of the committee was part of the efforts being put in place by both the traditional leaders, as well as members of the Nasarawa State House of Assembly, “so that at the end of the day, we can use three different reports to arrive at the final solution for our state.”

While restating the commitment of his administration to resolve all issues challenging the collective existence of the state as one people with common destiny, the Governor recalled that, in the recent past, the state witnessed inter and intra communal clashes occasioned by the struggle for ascension, self-determination and actualization.

“These agitations often resulted in boundary misunderstanding and sometimes disputes in some communities within the state, with all the attendant negative consequences,” he stated.

He said considering the pivotal role being played by traditional rulers in the maintenance of peace and security, his administration has continued to give priority to the traditional institution by providing enabling environment for the royal fathers to contribute their quota for peaceful co-existence and development of the society.

The high-powered committee, to be chaired by a former secretary to the Nasarawa State Government, Chief Philip Dada, has eight weeks within which to submit its reports.

Also, exercise equity and fairness in the recommendation of any community worthy of upgrade, review identified cases of composition of chiefdoms, districts and village areas, with defective and deficient instrument and its implications on their modus operandi.

The committee is also expected to examine disputed territories, expansionist tendencies and claims over contentious chiefdoms, districts and village areas.

Similarly, Engineer Sule also sworn-in the chairman and members of the Nasarawa State House of Assembly Commission, following the expiration of the tenure of the chairman, Alhaji Musa Isa Agwai I and two full members, as well as three part-time members.

Musa Isa Agwai I, is being re-appointed while a new secretary to the commission, Muhammad Ohinoyi Musa, was appointed.

While recognizing the synergy existing between the legislature and executive arms of government, aimed facilitating collective commitment to provide good governance to the people of the state, the Governor noted that the appointment will further strengthen the capacity of the commission to discharge its responsibilities, as well as training, recruitment, promotion and discipline of the personnel of the state House of assembly for effective legislative service.

In a vote of thanks on behalf of the appointees, Alhaji Musa Isa Agwai I, Chairman, Nasarawa State House of Assembly Service Commission, expressed gratitude to the Governor for finding them worthy of the appointment.

He pledged that the appointees will justify the confidence reposed in them by the government by working diligently to ensure effective and efficient service delivery.

Previous 80 Sugarcane Farmers Get NEPC Training On Value Addition In Nasarawa
Next 2023: Make Positive Change With Your PVC, CAN Tells Nigerlites