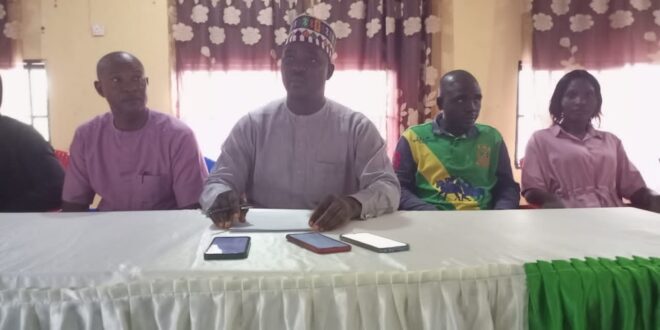 A group under the aegis Coalition for Development of Nasarawa State have lauded the Nigerian Security and Civil Defence Corps (NSCDC) for their recent feat towards protecting national assets.

Mr. Namo Maga, Vice Chairman of the group gave the commendation while briefing newsmen on Tuesday in Lafia, Nasarawa State.

The Vice Chairman of the group explained that NSCDC under the current Commandant-General, Ahmed Audi has shown capacity, commitment and professionalism in the discharge of his duties.

He said the NSCDC under the current Commandant-General has ensure that their personal gives priority to the protection of critical national assets which is their mandate.

He explained that NSCDC have also helped in apprehending rapists, yaho boys, cultists, and other criminal elements and handed over to other sister’s agencies where necessary.

He also commended the Commandant-General of NSCDC for approving the establishment of NSCDC training school at Udege community of Nasarawa Local Government Area, Nasarawa State.

He also lauded President Muhammadu Buhari and Governor Abdullahi Sule for their efforts towards tackling insecurity.

He explained that it is high time Nigerians should be patriotic enough and support the efforts the government at all levels are making to address insecurity and desist from glorifying criminals.

The group also commended the Nigeria military, Nigeria Police Force, Department of State Services as well as other security agencies for the recent feats against terrorists, bandits and other criminal elements across the country.

The coalition urged the security agencies to sustain the offensive attack on the criminals and take the battle to their hideous, as a way of ending the insecurity in the country.

Mr. Maga therefore urged Nigerians to vote wisely in the 2023 general elections without any sentiment of religion or tribe.