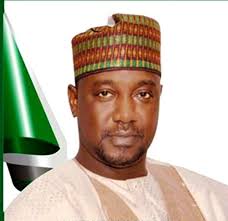 Chairman Niger state chapter of All Progressives Congress Haliru Zakari Jikantoro has dismiss claims and publication by some national dailies that he publicly declared his support for the aspiration of Governor Abubakar Sani Bello Senatorial ambition.

Jikantoro in an interview with journalists in Minna said the purported publication and rumors was was false and should be disregarded in its entirety because it was the hand work of mischief makers aimed at causing disaffection in the party.

He stated that as an individual who has the right to vote and be voted for, but as a chairman of the All Progressives Congress in Niger state he remains committed to ensure enabling environment and equal opportunity for every aspirants.

Reacting to a purported alleged petition was an illegal, unacceptable and should disregarded in all ramifications by the general public as well as the party faithfuls hence this is a deliberate attempt by the despite politicians with their antics to smear his reputation.

Jikantoro urged the APC members to remain steadfast, committed, peaceful, calm for the betterment and development of the party in the state, just as he remain undistracted, unshakable because he has never gone or done anything contrary to the provisions of the party constitution.
End.