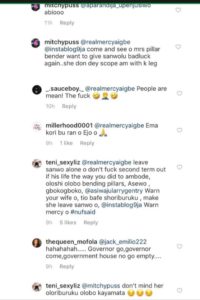 Nollywood actress Mercy Aigbe was been ridiculed for allegedly trying to flirt with the newly elected governor of Lagos State, Babajide Sanwo-Olu on Instagram.

The actress only commented under the post of Governor Sanwo-Olu but Nigerians decided to interpret it as flirting.

They claimed that the actress had jumped ship from former governor Akinwunmi Ambode whom she was rumoured to be in a relationship with.

According to the reports, the governor bought her a mansion among other things but Mercy denied these allegations.

After her comment under the governor’s post, Nigerians replied her comment and warned her to stay away from the new governor so that she would not transfer her bad luck to him.

They joked that she was ‘porting’ from governor to governor and added that she should leave the new governor alone to do his work.