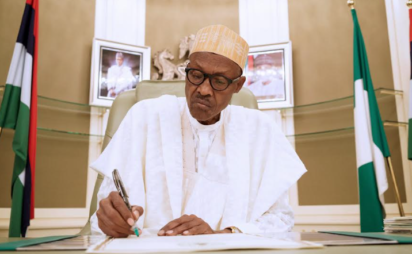 The Northeast Vanguard For Good Governance (NVGG) has called for the removal of the Managing Director of Northeast Development Commission (NEDC) over allegations of financial improprieties running into millions of naira.

The group in a statement jointly signed by Pwasato Aaron as national coordinator and Goni Umar Muazu as the national secretary also commended the Economic and Financial Crime Commission (EFCCC) and ICPC for instituting probe into the affairs of the commission.

The Northeast Vanguard lamented that since inception in 2018, the commission instead of boasting of infrastructure development which is her core mandate, but what you find are needless issues that border on personal aggrandizement and nepotism.

The statement reads “It was with unwavering patriotic zeal that we brought to the notice of Nigerians the worrying cases of financial sleaze and nepotism that has become a common norm at the Northeast Development Commission, which scandalously assumed a monumental dimension.

“As critical stakeholders and democrats of conscience from the region, we have beamed our searchlight to monitor, with keen interests, the activities of the commission since its establishment in 2018.

“Rather than boast of massive infrastructure in terms of rebuilding schools, hospitals, provision of pipe borne water and roads among others, which are in line with the core mandate of the commission, what you find are needless issues that border on personal aggrandizement and nepotism.

“It would be recalled that on July 23, 2020, the House of Representatives resolved to investigate the allegations of sleaze and misappropriation of N100 billion at the NEDC.

“This was sequel to the unanimous adoption of a motion of urgent public importance sponsored by the majority leader, Ndudi Elumelu at plenary. After the adoption of the motion, the committees on finance, procurement and NEDC were mandated to exhaustively investigate these allegations and report back to the House after eight weeks.

“Since July 2020 however, from our findings, nothing has come out of it because the leadership of the committee was alleged to have been compromised.

“These infractions at NEDC have continued unabated.

“However, it is gratifying to know that the Economic and Financial Crimes Commission-EFCC and the Independent Currupt Practice and Other Related Matters Commission-ICPC have already beamed their searchlight on allegations of financial misappropriation in the commission, and some directors have been picked, with the Managing Director on the beege of being arrested.

“We would however reiterate that the EFCC, in addition to her inquest, should also look into the following allegations obtained from credible inside sources.

“That the Managing Director, Mohammed Goni Alkali, takes home as monthly salary, N8.5million without approval from the salaries and wages commission; apart from a whooping Three Hundred Million Naira as running-cost for his office per annum. How justifiable is that?

“Since its establishment, no single employment has been carried out as the Managing Director, Mohammed Goni Alkali, singlehandedly handpicked from the ministries, people from his own tribe of Kanuri (90% of the about 60 staff of the commission are Kanuri).

“Purchase, by the Managing Director, of 100 Hilux Pick-Up Vans for the military and other security personnel at the cost of N28 million each, against the market value of N17 million in 2020, without any recourse to the board, an act which completely negates the country’s procurement laws.

“The Managing Director singlehandedly procured all Covid-19 equipment to the tune of N5 billion without approval from the board and procurement procedures.

“Five billion naira that was approved and released as special funds for Ngwom Housing Estate is missing in transit between the ministry of Humanitarian Affairs and the office of the Managing Director of the commission.

“Funds earmarked for the purchase of houses for staff and the construction of corporate headquarters in Maiduguri, as well as mass housing across the six states, has been diverted and squandered, without any convincing explanation.

“Funds meant for the production of the master plan of the region are being stolen through bogus contracts using pseudo names.

“Funds appropriated two years ago to establish 18 additional computer training centers have been misappropriated by the Alkali-management.

“Funds meant for the construction of offices in the six states of the region have been diverted to other personal uses.

“Funds meant for the construction of ‘Mega Schools’ in the 18 senatorial zones of the region have disappeared. Tractors and other agricultural equipment, approved and fully funded, are yet to be purchased, two years after, while billions of naira are being spent on fraudulent food procurement at the expense of farmers of the region.

“Billions of naira spent on the defunct PCNI liabilities should be thoroughly investigated as some of the claims cannot be validated. The board of the Northeast Development Commission Education Endowment Fund-NEDCEF, was inaugurated on August, 7, 2020, as an education component of the commission, but for close to one year now, the board has not been able to take off, let alone achieving its core mandate of interventions in the education sub-sector, because of meddlesomeness and needless frustrations by the Managing Director. Instead, funds earmarked for interventions by NEDCEF are being diverted for personal use by members of the Board Of Trustees.

“It is no surprise that during the recent presidential visit to Borno state by President Muhammadu Buhari, no single NEDC project was commissioned, because there was non to be commissioned.

“It is also imperative to note that the synergy with United Nations agencies has collapsed because of glaring lack of transparency in handling donor-funds by NEDC board. They are packing out of Borno state, and other flash-points that require urgent interventions, in droves”

OUR PRAYER AND CONCLUSION.

We would like to state, at this juncture, that if urgent steps are not taken to remove the Managing Director, Mohammed Goni Alkali and subject him to a thorough investigation and prosecution, the commission will be in the threshold of imminent collapse. And failure to do so will compel us to resort to other means of having our grievances taken much seriously, which shall include legal action, peaceful demonstrations on the streets of Abuja the nation’s capital, and an International Press Conference to press home our demand for justice”.