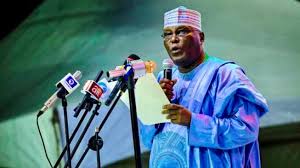 Ofomba added that God revealed Atiku’s presidency to him through the 1,777 spirits he deals with, adding that the former vice president was unstoppable in clinching the presidency.

He said by divine arrangement, Atiku would emerge victorious at the presidential election petition tribunal in Abuja, insisting that if the tribunal does not declare Atiku winner, he will resign his traditional medicine practice.

The Guardian reports that Ofomba made the declaration at this year’s celebration of the Onwa Nge Festival in Nando community, Anambra east local government area.

Previous ‘Why I ran in Saudi Arabia’- Muhammadu Buhari
Next Davido’s girlfriend Chioma barb pregnancy rumours: Did I tell you that I’m pregnant