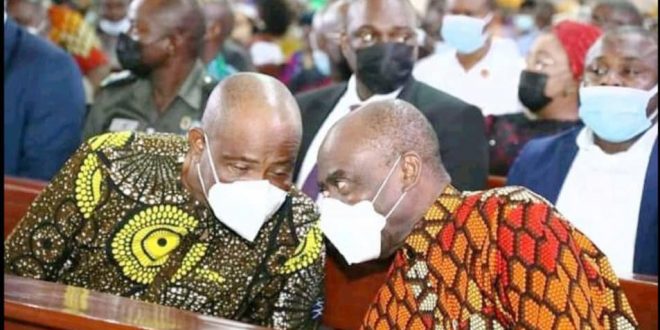 The former Governor of Rivers State, Dr. Peter Otunuya Odili, has eulogized his late elder brother, whom he tagged his ‘soul brother’ Chief Sir Fidelis Obi Odili, the Nze-Obi of Ndoni, who was buried recently in hometome in Ndoni, Rivers State, in an emotion laden tribute, written in appreciation of a man whom everybody acknowledged to be a humane, generous and forthright.

This was contained in his tribute titled “Tribute to my senior ‘soul brother’ Sir. Chief Fidelis Obi Odili KSS, KSM. JP.” captured in page 7 of the 140 pages Publication of Tributes and Condolences for the late business mogul, where he recalled his school days with him and served as cook, steward and housekeeper.

The former governor noted that, “I became your “soul brother” as a toddler. You inspired and motivated me to be a good scholar. You were in Stella Maris College Port Harcourt, while I was a primary school child in St. Michael’s Primary school, Oguta II. I was in Standard 5 When my mother died in a road traffic accident on 30th of August 1959. Our Great Dad, “The Ochilli of Ndoni” of blessed Memory asked me to choose who to stay with to finish my Primary education in standard 6 and I choose to stay with my ‘soul brother’ Fidelis who had just passed his Cambridge exam in 1959 and got employed in 1960 as a staff of the Board of Internal Revenue, Onitsha. I lived with you from January to December, 1960 as a younger brother, as a cook, steward, housekeeper and “messenger of peace”. We lived like friends, sharing a single room at the Wilsons, 32 Onira Street, Odoakpu Onitsha.

“Throughout my days in C.K.C. I spent most of my holidays between you in Enugu, and our elder sister Regina, in Port Harcourt, and Daddy at home in Ndoni and Ashaka, when dad became a member of the Customary Court of Appeal.

“The Civil War scattered all of us from Port Harcourt and consumed our father and brother-inlaw Dominic in November 1968 at Ndoni. We reconnected after the war, with its attendant consequences. We all rose to the challenges of the time and God blessed our efforts. You voluntarily left service for private life. Your success story began and soared through the years relentlessly. You touched many lives positively with your calm, humane, gentle and humbling candour. You cared and provided for your nuclear and extended family.

“You lived with the fear of God, unable to raise a voice against or hurt anyone. You were the classic ‘dove’, a perfect gentleman. You were a true man of peace. You lived your life fully in contentment. At 82, in spite of your human health challenges, you never lost your smile.

“We were 5 brothers. With your passing to Paradise you have left me alone in the physical but I know that you will always be there spiritually as my “Senior Soul Brother” with reminisces of the ‘musical taste ‘ we shared, Nat King Cole, Dean Martin, Brooke Benton Etc.

“He promised to look out for and after his nuclear family and keep the Odili Family flag flying.

He said “You were visibly proud of Mary and I , and you showed us genuine affection. We thank you.” Odili noted.

“Losing a close and beloved elder brother can be very painful and agonizing. We therefore lack the words to comfort you and assuage your pains, our leader. But as Christians , we have to accept his death as the will of God and be grateful to God as well not only for the fulfilled life that he lived but also for his Catholic devotion to a life of service to God and humanity.

“In his death, we have lost a true elder statesman of honour , great conviction and compassion whose impact was diversely felt by all those that knew him and he left his great footprints in the sands of time.

“The worthy and exemplary legacies of unconditional love and care for others and his dedication to the cause of peace and progress of his community and Rivers State will continue to keep his memory in our hearts forever.” Wike noted.

In her tribute to her late husband, wife of the deceased Chief Mrs. Francisca Chinyere Odili,

“I met Fidelis Obi Odili at the twilight of the Nigeria civil war in the then East Central State, precisely in Awo- Omama, in present day Imo state. He was a pristine gentleman whose kindness showed in his spoken words. I just knew that I found the one who will share my world. Obi loved life and loved me to the fullest.

“We married on the 13th day of November 1971 in a beautiful and simple ceremony in Christ The King Catholic Church, Onitsha.”

“Obi is soft, yet firm, principled , and incredibly determined. Whatever he makes up his mind to do, he pursues with intense passion. His life as a civil servant with the internal revenue service is a story full of commitment and devotion.

“In 1975, my husband took a decision to quit the civil service in favour of business and enterprise. This was one of the biggest, shocking and life changing decision he ever took. We had to move from Aba to Warri. This epic decision and journey changed our entire world. It was the right. It didn’t come easy, but it came right. Like most things he did, he measured and was methodical.

“My husband’s love for family is legendary. Everyone became part of his commonwealth. He cared and loved and attended to every need of everyone. Without a doubt, he was the big umbrella that not only sheltered everyone but served to unite and rally his large family. Obi made sacrifices so that he could accommodate everyone. To him, every member of the family mattered uniquely. He wanted so much to study law and become a great jurist,and even when the opportunity presented itself, he sacrificed it to continue to provide much needed support to his siblings and indeed the entire family. This explained his unbridled joy when his brother Peter married a lawyer and why his admiration for his uncle Okwuchukwu remained elevated. “

“Our 50th Wedding Anniversary would have culminated on the 13 th November, 2021, while the good Lord has willed it that we would not spend it together physically, I remain thankful that we had started celebrating it in our own way since the beginning of the year. Despite the restrictions brought on in recent times , we said our Rosary together daily and still listened to our favourite Nat King Cole, Louis Armstrong songs, while reminiscing and wondering how 50 years went by so fast. I am glad that very early he made his way right with his maker. I am joyful that he had time to fully reconcile to God . He will always live in my heart.

“My husband fought a good fight. His resilient spirit shone through the pain that burned in his inside . Almost always, he will look into my eyes and ask how I am doing. The unspoken care and concern he showed on me during his most challenging and infirm days, are worthy memories that will last me for a lifetime. He never stopped asking how I am able to keep the home, with no faltering in step or rhythm. She noted.

In his tribute to his father, the Son of the deceased Joel Oge Odili, said “The way you navigated relationships in business with dexterity, humility, intellect, and charisma left me realizing that some things can never be learnt in the four corners of a classroom. The wealth of knowledge at your disposal when engaging people of all class, creed, color, age, and background simply revealed a style that was both alluring and exemplar.”

“It was quite awe inspiring watching you break down and overcome people’s prejudices and ultimately converting them to friends. It looked so easy when you did it, but I found it was rather difficult to just intuitively put yourself in other people’s shoes, feel what they feel, and appreciate their individual idiosyncrasies and eccentricities all the time and every time. I admired you the more for it. Because I realized it wasn’t easy work.” He noted.

Previous Famous Afropop Sensation Platini Nemeye, AKA Platini P Drops “Shumuleta” Single
Next How Not To Defend Colonialism In Africa