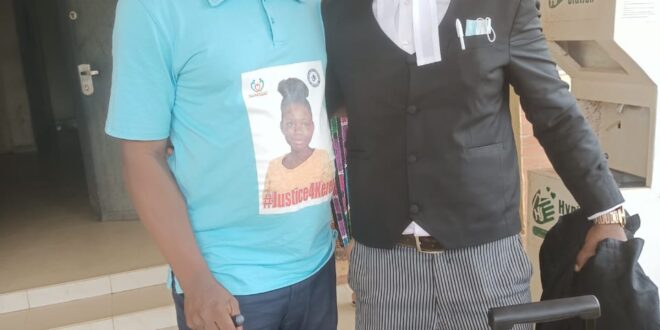 ED of Men Against Rape Foundation, Lemmy Ughegbe with Barrister Johnbull Adaghe after the court ruling

Three hundred and forty-five days after refusing to comply with its own resolution to conduct investigative public hearing into the rape and death of 14year old boarding student of Premiere Academy, Lugbe, Abuja, Miss Keren-Happuch Akpagher, the Federal High Court, Abuja Division has approved the request of Men Against Rape Foundation (MARF) to compel the speaker and Members of the House of Representatives to do so.

Keren-Happuch died on 22nd of June 2021 following medical complications caused by condom left inside her by a killer-rapists. The condom infected her with sepsis and spiked her blood sugar, which led to her death.

Ruling on an exparte motion argued by counsel to Men Against Rape Foundation (MARF), Barrister Johnbull Adaghe, Justice Evelyn Maha held that the request to commence the mandamus proceedings had merit and accordingly granted it.

“Having considered the submission of the applicant’s counsel in support of the motion and all documents placed before me, I find merit in the motion and I hereby grant leave to the applicant for judicial review for an order of mandamus compelling the respondents to give effect to their resolution of the 7th day of December, 2021, by conducting investigative public hearing on the death or the immediate and remote cause of cause of death of Miss Keren-Happuch Akpagher who died on the 22nd day of June, 2021, at the Queens Hospital, Wuse Zone 4, Abuja”, Justice Maha ruled.

Speaking at a press conference on why they sued the Speaker of the House of Representatives and his colleagues, the Executive Director of Men Against Rape Foundation (MARF), Lemmy Ughegbe said through this case “we shall establish a legal precedence in our country that will make lawmakers responsible and accountable to the people.”

“Our organisation and Amnesty International wrote several letters to the Speaker of the House of Representatives, Hon. Femi Gbajabiamilla to remind him that they were yet to comply with the resolution to probe Keren’s rape and death. But the speaker neither replied our letters nor took steps to enforce their resolution”, Ughegbe stated.

“How can a speaker who sits at the pleasure and expense of the Nigerian people, treat our call to duty with such arrogance and contempt? Where is the honour in people who want to be addressed as honourables if they will not honour their own resolutions after 345 days? This is why our organisation is in court. We want to use this case to establish that resolutions of the National Assembly are not for fun. Once you pass a resolution, you are duty bound to enforce it”, the gender rights activist declared.

“We must put an end to lawmakers passing resolutions for the optics just to score political points and look good when they are not committed to enforcing those resolutions. The legislature is serious business and we hope by this court case, a judicial pronouncement will affirm our argument and put an end to the shenanigans at the legislative arm of government”, he concluded.

In her own remark, the 2nd defendant, Mrs Vivien Vihimga Akpagher said “I am saddened that 17 months after my daughter’s rape and death, I am yet to get justice and the killer-rapist is still out there waiting to prey on another innocent vulnerable child.”

“My daughter is gone. She will never come back. So, I am speaking and seeking justice so that no other child will suffer and die like she did as a result of sexual abuse”, she added.

She wondered why the House of Representatives will dishonor itself by not honouring its resolutions, adding “we are in court to make them act honourably.”

• An Order of mandamus compelling the respondents to give effect to their resolution of the 7th day of December, 2021, by conducting investigative public hearing on the death or the immediate and remote cause of cause of death of Miss Keren-Happuch Akpagher who died on the 22nd day of June, 2021, at the Queens Hospital, Wuse Zone 4, Abuja.

• An order of mandamus compelling the respondents to carry out their constitutional role of investigative public hearing into the death or the immediate and remote cause of death of Miss Keren Happuch Akpagher – a boarding student of Premiere Academy, Lugbe, Abuja, who died at the Queens Hospital, Wuse Zone 4, Abuja, on the 22nd day of June, 2021.

The reliefs sought above were predicated upon the followings grounds:

• A – 14 years old Keren took ill while at school and was taken by her mother to the Queens Hospital, Abuja, for treatment, but unfortunately died on the 22nd day of June, 2021.

• Queens Hospital confirmed to the 2nd applicant that Miss Keren illness and death was caused by decaying condom and dead spermatozoa hurriedly abandoned in her virginal by her abuser/rapist.

• Her unfortunate demise elicited wide condemnation and caught the attention of 1st applicant who called and held rallies and press conferences in its efforts to draw the attention of the authorities to the menace of rape in our society with a view to bringing perpetrators to justice.

• In response to one of the agitations and rallies held within the premises of the National Assembly, the respondents, on the 7th day of December, 2021, passed a resolution to conduct public investigative hearing through their related Committees, with a view to enacting legislation that would abate further occurrence. Attached herewith and marked exhibit “A” is the said House of Representatives Federal Republic of Nigeria, Votes and Proceedings of Tuesday, 7th December, 2021. See: pages 2192 – 2194, particularly paragraph 6, at page 2192 of the exhibit.

• The respondents in the said resolution, gave themselves a timeline of two weeks within which to submit the report of the committees to the house.

• Following their failure aforesaid, applicants caused their solicitor to, by a letter, draw respondents’ attention to their said resolution and urge them to carry out their said investigative public hearing. Attached herewith and marked exhibit “B” is the said applicants’ solicitors letter dated 8th day of September, 2022.

• The deadline given in the said applicants’ letter for the respondents to comply with applicants’ demand lapsed on the 15th day of September, 2022, and the respondents have failed to discharge the public duty imposed upon them by the provision of sections 88(1) and (2), and 89 of the Constitution of the Federal Republic of Nigeria 1999 (as amended).

• That notwithstanding the said solicitors’ letter, respondents have failed and or neglected to discharge their public duty entrusted upon them by the supreme law of the land and in defiant to their own resolution of the 7th day of December, 2021.

• Child abuse and varying forms of sexual and gender-based violence which poses grave psycho-social public health problems are on the rise and the failure of the respondents to carry out their constitutional duty of investigative public hearing or enforce their resolution of the 7th day of December, 2021, would further emboldens perpetrators of the heinous crime and put the society in further danger.

• The anti-social conducts manifest in cases of rape are menace to the society; a crime against the state, womanhood and humanity; particularly in a civilized society like ours.