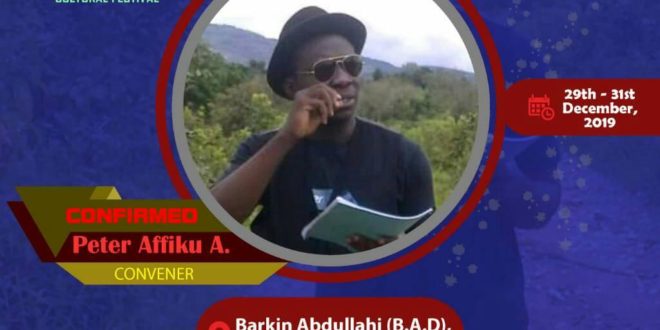 As the convener of Eggon Sport and Cultural Festival, what informed this lofty idea?

My name is Peter Tony Afiku. I’m from Nasarawa state, Eggon by tribe, and based in Lafia. The idea behind this platform, Eggon Sports and Cultural Festival (ESACF) came to me first of all from my sporting background, because I play basketball, and judging from the way we struggle to play in any of the professional leagues. So I saw that it would be nice to create a platform so as to engage and showcase our talents in the presence of thousands of audiences both within and outside the state. That is the reason behind this platform.

What importance is ESACF to the citizenry especially as it concerns job creation?

Let me start by defining culture. Culture is said to be a people’s total way of life. As a people, I believe we have a culture. Coming to the sport, it is the only thing that speaks a universal language. Sport does not discriminate which is the brain behind the two. Since its inception in 2016 till date, I have mingled and engaged with lots of sportsmen from all the local governments of the state who participated in the previous editions. To be sincere, it has created unity between them. In terms of job creation, we are not there yet but this platform has engaged about six persons making up to 10,000. This happened through the instrument of organizing events such as ESACF. I can say that the festival brings together both the rich and the poor so that they can appreciate our differences as well as help each other. We are also hoping that one day this platform can engage up to 300 citizens to be self-reliant rather than folding their hands saying there is no job.

How can ESACF bring unity amongst different ethnic groups in Nasarawa state?

In 2016 during the first edition, we were able to host four teams. These four teams automatically mean 88 players which comprise 88 households. So many persons attended the event because their loved ones were playing. This has brought people from all works of life together.
Our expectations were that approximately, we expect 78% indigenes to attend and 22% will be non-indigenes who will just come as part of our audience. Even in my own team, we have people who are not from Nassarawa state and since they are involved their families are also involved. We are not only preaching unity among the Eggons but the state in general. If we understand the initials, Nigerian teams were known as the green eagle which is also a product of sport. This festival will achieve a lot if only we accept to follow the language of sport.

What are your major challenges in hosting events such as this?

Finance has been a major challenge. Since its inception in 2016 till date, it’s been God all through. However, I will not forget to thank our partners especially the former deputy Governor of the state, Hon. Silas Agara has ensured this idea did not only see the light of the day but that is has come to stay. Even at a time when there seemed to be no hope, the former deputy governor gave us hope. We also had partners from the cultural sector that have contributed immensely in sustaining this noble idea. I called the former deputy governor because he is not an Eggon man. If you check our platform, you will see that we publicised our sponsors. The support has been very poor. We don’t get even up to 10% as projected from our sponsors but God has never let us down.
What I will tell prospective sponsors is that sponsoring such a program is not all about dashing or throwing away money, there is always a return of investment which could either be in kind or in cash. Some of Our politicians think the only time to sponsor an event is when the election is at the corner. That is a wrong perception because developing the grassroots is the key irrespective of election or no election.
We are taking it to Eggon as a nation because charity begins at home.
When you cannot manage or control your people, then you can’t manage anybody. This time, we didn’t take it to Eggon as a language but rather a community. The venue for this year is People from BAD and those not from Nassarawa state are in B.A.D We created this avenue for them to participate so we can create unity amongst ourselves. Like I said earlier, there is always a return on investment

As a promoter of the sport, what would you say about sport development in Nigeria?

I will not just say sport development in Nigeria is poor, but we lack supporters. I believe their people who can still give sport development a facelift. I may not have gone around the country, but from where I am sport development is very poor. People don’t invest in the sport until there has an immediate benefit which is very bad.

What should we expect to come on 29th December 2019 for the fourth edition of this programme?

We are expecting the best and I will give the best because the grassroots is where we’ll all starts. There are lots of hidden talents in the grassroots. Our duty in the Eggon sports festival is to discover and showcase these young breeds to the rest of the world. Eggon festival is a platform set to reveal, to invoke, to develop, and unite Nations.