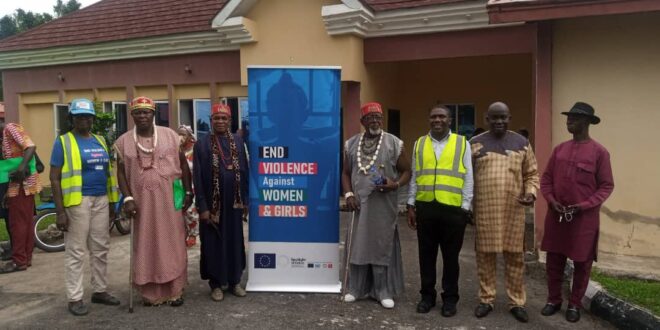 The United Nations Children’s Fund and European Union program in Ohaozara local government area of Ebonyi state have clarified the Traditional rulers and other stakeholders in the community on laws against gender-based violence.

The program which was organized by the National Orientation Agency, NOA on Tuesday and Wednesday in the LGA was supported by the EU/UN Spotlight Initiative.
A 45-man surveillance committee team on the community-based, child and women protection committee(CBCWPC) was trained and established. The committee members drawn from various stakeholders in the community are to help monitor and report areas where harmful practices are been done against women and girls’ children.

Addressing participants at the program, the desk officer; Child Abuse and Trafficking with the state Ministry of Justice, Barr. Ijeoma Mike-Ajanwachukwu explained the laws against rape to the people.

She said, “anybody found to be an accomplice to a rape case and the rapist is liable to life imprisonment. even parents of the victim who may have conspired to cover the rape issue are liable to imprisonment and other charges that may follow”.

Eze Onyiba Agwu noted that about 15 cases of possible marriages he has handled in his palace were mostly caused by women.

A Child Specialist with the United Children’s Fund, (UNICEF) Victor Atuchukwu encouraged women to register the birth of their children.

Noting that the birth certificate is a child’s means of Identification. Atuchukwu said the agency had an understanding with the state Ministry of health in ensuring that every child is registered once given birth. 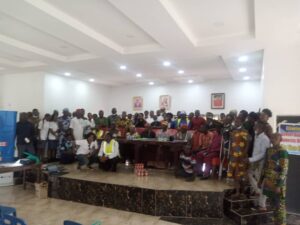 “I don’t know if that is still happening. If it is still happening please let’s keep it up if it is not happening please let’s start it again. All of us seated here at least have voters Card or driving licenses or international passports, we have a lot of things to identify ourselves but the birth certificate is the only means of identification that a child has till he or she gets to the stage of getting one.

“On spotlight initiative, the fund for this activity that we are doing across the state came from the European Union in collaboration with United Nations. In Nigeria, we are having this implementation of the spotlight, our activities are aimed at eliminating all forms of violence against women and girls in communities, and in Nigeria, we are working in only six states where this money is being used and this engagement is held with the stakeholders”.

Earlier, the state Director of the National Orientation Agency, Mr. Desmond Onwo noted that ensuring the protection of women and girls’ child means ensuring a better society.
And further said that the world frowns at gender-based violence especially when relevant agencies are involved in the country’s dialogue.

However, the Unicef Desk officer with the National Orientation Agency, Mr. Uchenna Una advised the participants to adhere to lectures that promote the well-being of people and eschew all obnoxious practices against women and girls.