We are working with some PDP Senators to remove Saraki — APC

MJA August 14, 2018 Business Comments Off on We are working with some PDP Senators to remove Saraki — APC 376 Views

The All Progressives Congress, APC has disclosed that the party is working with some senators from the Peoples Democratic Party, PDP, in its quest to remove the president of the senate, Dr. Bukola Saraki.

This was disclosed in a statement by its Acting National Publicity Secretary, Mr. Yekini Nabena.

“As a Party, we don’t believe in inducing lawmakers to achieve our legitimate goal of removing Saraki as Senate President. We will get the support of some PDP Senators to get the required 2/3 vote and impeach Saraki. We are already talking to some of PDP Senators who believe and support the direction of the President Muhammadu Buhari administration to achieve our legitimate goal,” the party said.

The ruling party reiterated its call for Saraki’s immediate resignation as Senate President.

“He cannot lead the APC majority Senate. But if he fails to resign honourably, we will impeach him. The PDP’s propaganda and threat of violence cannot save him,” it added. 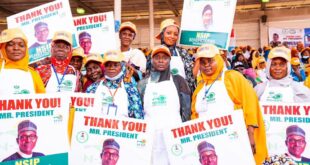