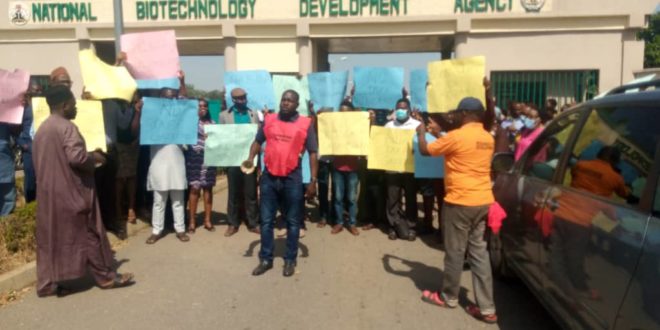 A woman, Mrs. Faith Bassey working with the BioResource Development Centers (BIODEC) of the National Biotechnology Development Agency (NABDA) allegedly lost pregnancy she has longed for years due to forcefully working on the farm of the coordinator of BIODEC, Adiabo in Cross River State, Dr. Urowu Prince E.T England.

This was disclosed by the Secretary of Academic Staff Union of Research Institute NABDA branch Comrade Jessica Effiong who told PEOPLEREPORTERS during a protest at the headquarters in Abuja Monday.

Comrade Effiong lamented that the research Institute is in a state of comatose due to bad leadership by the management of the agency.

According to her, the coordinators representing NABDA at various centres across the country are selected based on sentiment instead of merit, hence most of them don’t stay at their places of the assignment rather they stay in Abuja from Monday to Friday every week.

She said despite complaining to the acting DG of the Agency, Prof. Alex Akpa about the predicament of the staff that loss her pregnancy, nothing was done about it, instead, the DG blamed his inability to take action on the fact that he is still in an acting capacity.

‘Another thing that affects BIODEC is the issue of the selection of coordinators. The coordinators sent to those centres were sentimentally selected and these people turned demi gods in these centres.

‘There was a coordinator that force a staff, a pregnant woman who has been looking for the fruit of the womb for the past seven years, that coordinator made the woman lose her pregnancy. that issue the acting DG did not act on it and I know what it took the union to appease the family’’

On what really happened to the staff, the secretary of the union said ‘the woman did not conceive for a while but after over seven years she became pregnant, but the coordinator has a farm in the centre and uses the staff to work on the farm while he remains in Abuja.

New pregnancy test reveals who is the father of your baby

‘So the woman told him she can’t go because of her condition but the coordinator forced her to go to the farm and it was in the process that she lost her pregnancy, we met with the acting DG and he told us it is due to the fact he is still on acting capacity and can’t do anything.

‘So we are demanding that our centres coordinators to be on tenure not a lifelong thing because these people if they get to the centres, they would change and some of them are even level 9 officers, this is because they were picked based on sentiment.

‘We have level 12 officers that can be sent to represent the agency at such centres but they are not selected because they are not related to the management so when this level 9 get there they turn to demi-gods and they don’t attend to the challenges of the staff and that’s when these staff will run to us in the headquarters.

Meanwhile, the union also gives the Federal Government 48 hours to address challenges encountered by the workers at the agency or face a disruption of activities at the Ministry of Science and Technology, the parent ministry.

The acting chairman of ASURI in NABDA, Comrade Ogunmefun Samson disclosed that the national body of the union has been placed on intimated on the development of the agency for support.

He said the workers are also protesting the non-remittance of Pension deducted from their salary by the management. 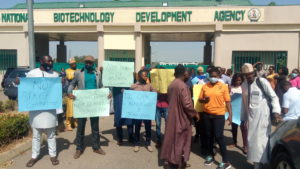 “The management if they lack what to do, they should allow those who are capable of doing it to come, because we are tired of negotiation.

“This struggle we have been on for years. The management is only good in talking when it comes to implementation, it’s difficult and we are tired. We have told them we don’t need any further negotiation. What we want at this point is implementation and as it stands now, we don’t have an organogram, no proper welfare for the staff, no promotion.

“The year is coming to an end and no one has an ID card, there is no gazette, they just bring people in and dump them, no office table, no chairs, dilapidated structures, no toilet you have to use the bush, no internet connectivity and the money is being allocated for all these things but we don’t know where the money is going.

“We are tired of this kind of working environment because this is an agency, we will spend 30-35 years and we cannot continue to allow few people to hold us to ransom, we want an all-inclusive style of leadership and not just some set of people that will sit down and determine the destiny of workers.

“So we are calling on the relevant authority, the ministry, the government to come to our rescue. This is a peaceful demonstration, and we are using this time to register our displeasure because after now, we are heading to the ministry if nothing is done with immediate effect.

“We are giving the government 48 hours and if after 48 hours nothing is done, they should expect us in the ministry of Technology, to go and carry on with our protest. This is just a peaceful demonstration that’s why you have not seen us moving to the main express. So if nothing is done in the next 48 hours, we will call for support from our sister agencies and we mobilised to the ministry”.